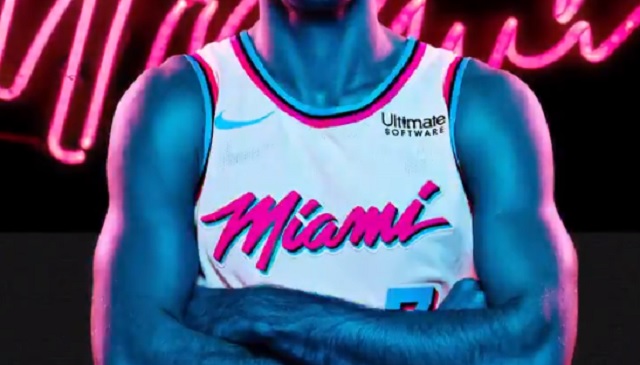 Back in December, a leaked version of Miami Heat’s ‘Miami Vice” inspired “City Jerseys” made its way on the Internet and caused Twitter to go crazy with excitement.

This is the best alternate jersey ever. Do not @ or argue. pic.twitter.com/9GqV7PXOqY

Today the team officially announced that they were going to debut the jerseys on Thursday against the Sacramento Kings and will put them on sale shortly thereafter.

The Miami Heat officially unveiled its Miami Vice-themed City Edition uniforms in all their glory on Tuesday. The uniforms will make their debut Thursday when the Heat plays the Sacramento Kings at AmericanAirlines Arena — the team’s first home game since Jan 14.

The uniform combo, which were first seen last month when a leaked version appeared on the internet, contains white jerseys with pink, black and powder blue accents — a color scheme synonymous with that of the TV show “Miami Vice.” Player numbers will be powder blue with black and pink shadowing, and the word “Miami” is written in the same pink color and script that appeared on the front of the old Miami Arena, which served as the Heat’s home arena from 1988-1999.

These are easily the best looking jerseys ever made and it’s not even close. Shut up and take my money, Miami Heat.