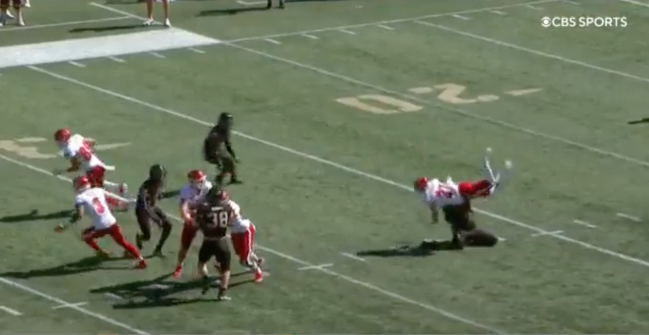 Army football is about as hard-nosed as it comes. Scratch that.

Army football is as hard-nosed as it comes.

When the Black Knights take the field, whether that be the gridiron or the battlefield, they are going to punch you in the mouth. That was certainly the case on Saturday.

During the its home game against Miami of Ohio on Saturday, Army jumped out to a 17-3 lead in the first half. That didn’t stop them from taking their foot off of the gas.

On 4th-and-13, the Redhawks lined up to punt and the Black Knights came flying up the middle to try and block the kick. Although the stuff attempt was unsuccessful, Army did get a piece of the ball and caused a poor punt.

On the other hand, Army did get ALL of the punter. Because the ball was touched first, a defender is able to make contact with the kicker without it being roughing.

In this instance, however, “touched” is an understatement. The punter got OBLITERATED.

Outside linebacker Malkelm Morrison came untouched off of the left side and demolished freshman punter Dom Dzioban. He never stood a chance.

Army was able to take advantage of the short field, added a field goal before the half, and went on to win. It was an unfortunate result for Miami, and the team is going to be banged up after going head-to-head with the undefeated military academy.

Few, if not none, will be more sore than Dzioban. Ouch.