NFL Prospect Micah Parsons On His Mindset Before The Draft, How He Got The Nickname ‘The Waterboy’, And How He Plans To Spend His First NFL Paycheck 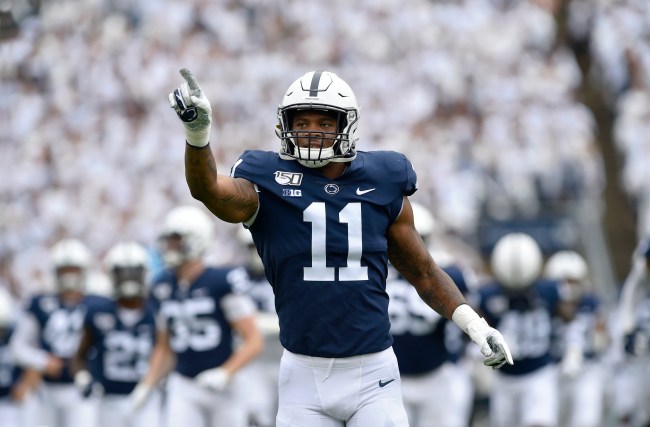 Penn State standout linebacker and projected first-round pick Micah Parsons sat down with us to share his mindset leading up to the draft, how he got the nickname ‘The Waterboy”, how his military background played a role in his career, and how he plans to spend his first NFL paycheck.

Ahead of the NFL Draft, Parsons partnered with USAA, Official NFL Salute to Service Partner, to honor his family’s history of military service that helped him prepare for success in life and on the football field. Parsons’ two uncles, Marcel and Michael McDonald, currently serve in the Army and Air Force and played a big role in Parsons’ life. Marcel will be by his nephew’s side on Thursday in Cleveland, Ohio for the NFL draft.

Discipline, sacrifice & leadership are all military qualities that I have inherited from my military family. Thank you to @USAA for allowing me to honor them and their service before I start my @NFL career with this week’s #NFLDraft. #SaluteToService #USAApartner pic.twitter.com/JwuIb4dRoW

Now that the draft is just a day away, Micah is a bit anxious because the decision of which team decides to pick him is out of his control but he knows that he did everything to put himself in the best position to get drafted at the top of the board.

“I did everything I could do to prepare myself, to represent myself in the best way possible. Now it’s up to the GMs to decide. I’m a little bit nervous, anxious, and can’t wait to hear my name called.”

The Penn State standout linebacker has turned off his phone and TV and isn’t watching ESPN or reading any social media leading up to the draft.

“I had to cut it off, they have all these different mock drafts, in reality, it’s really up to the GMs, so I’m staying away from it and I’m letting the GMs do their thing.”

The NFL rookie is pretty confident that whichever team picks him is getting the best player in the draft.

Micah has taken the past week to look back and reflect on his college career before he has to get back to work on the football field immediately after the draft concludes.

“Just this past weekend, I was with my roommate from college and just looking back and appreciating time. You know, I think when you get to college, you’re like, man, I gotta get out of here in three years. This is everything I wanted. You know, I just wanted to go to the NFL but now that we’re days away from the draft it brings a tear to my eye, I’m like man I was just here, I graduated college already, it feels like my mom just dropped me off for camp.

“I don’t think I appreciated my time all the way… when I was in Beaver Stadium at that practice and hearing the fans cheering and I’m like, wow, I’m never really never going to play another game here and for me, that’s unbelievable…And now I’m just starting to appreciate everything. I can appreciate and enjoy the process right now because after the draft it’s time to get to business.”

The 6-foot-3, 246-pound LB recently crushed his pro day when he ran an impressive 4.39 40-yard dash despite being one of the handful of players who didn’t play last season after opting out due to the pandemic.

While staying in physical shape was easy for Parsons, he says he struggled to maintain his mental edge during his time away from football and went out of his way to find new sports to push himself mentally in the past year.

“The process was so hard. The process was extremely frustrating not being able to compete and not being able to be who you are…and I’m a competitor. I was just going out every day to find anything to challenge my mind. I was going out bowling, trying to find new crafts, I just tried in different ways to push myself mentally because I was missing that mental part of football from being away from the game. Other than that I was in the weight room and the film room every day just finding a way to get better.””

Parsons is widely considered one of the top defensive prospects heading into the draft because of his elite athleticism that helped him net 191 tackles and 18 tackles for loss in two seasons as a linebacker with the Nittany Lions.

As a kid growing up in Harrisburg, Pennsylvania, Parsons showed glimpses of that athleticism when he was nicknamed “The Waterboy” based on the Adam Sandler movie from the late 90s.

“When I was in the pee-wee league at an early age I used fly around and hit people hard.
I had that type of mentality where I was a young age playing linebacker, It was kind of instinctual and they would blitz me every play, and eventually, they started calling me the Waterboy because they would tell me to go blitz and tackle people, like The Waterboy, Bobby Boucher”

Now that he’s all grown up Parsons is going to make sure his mom is taken care of when he finally gets his first NFL paycheck.

“I want to finally get my own house, clear my mom’s debt, I moved a lot when I was younger and if I could put me and my mother into our own home and have something to call ours, it would be amazing.”