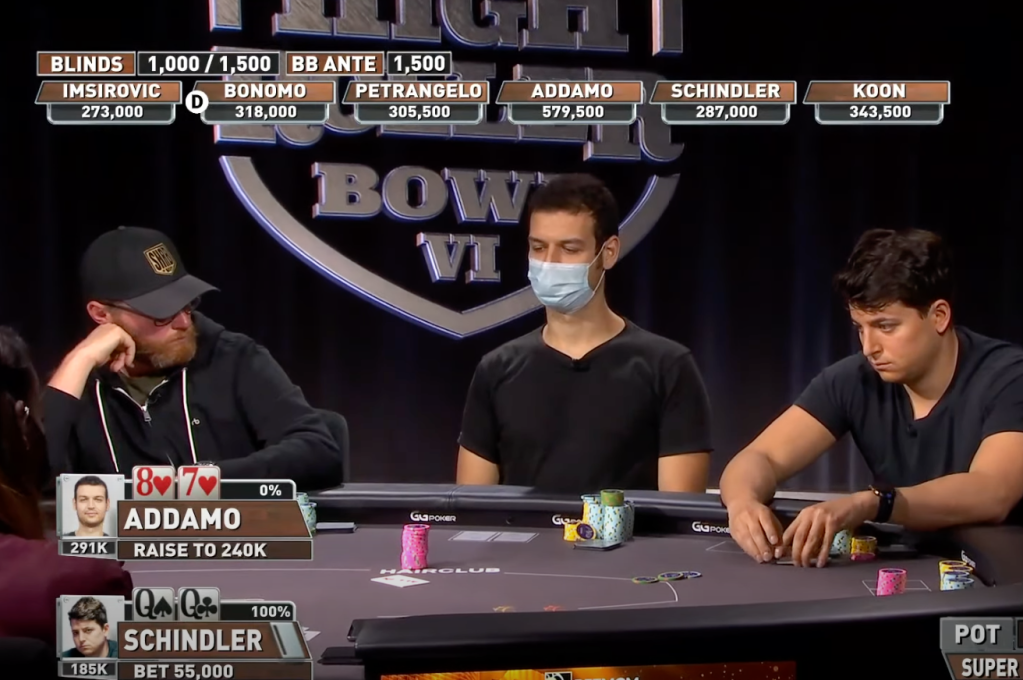 Michael Addamo has $10.1 million in career tournament earnings. He’s considered by virtually everyone in the poker industry to be one of the top players in the world, and he’s recently been on an insanely hot run after winning back-to-back events (the last 2 events) in the 2021 Poker Masters to claim poker’s coveted purple jacket.

On Day 1 of the event, Michael Addamo executed a truly masterful bluff against Jake Schindler who had QQ to start. Addamo began the hand with 8h7h and the flop came out with only one heart but he hit middle pair with a 7.

The action started before the flop but I’ll let you guys watch the clip and see how it all unfolds without spoiling anything for you. It really is cool to see how one of the best poker players in the world operates at such high stakes ($300,000 buy-in!!!).

Never in my life have I stayed as still as Addamo did while pulling that bluff off and I TWICE had to hide under my ex’s parent’s car in the garage when the alarm got tripped and they searched the house for me and her stepdad was inches away from where I was hiding. The man was ICE COLD on that bluff.

If I’m in Schindler’s seat I don’t know how I’d ever fold QQ, I just don’t see Addamo showing a King early on. The $19K bet on 1/1.5K blinds was sizable. But I guess I’d also never see anything in Schindler’s $55K bet that Addamo saw that spurred him to go all-in. These guys are playing chess and I’m thinking in terms of checkers.