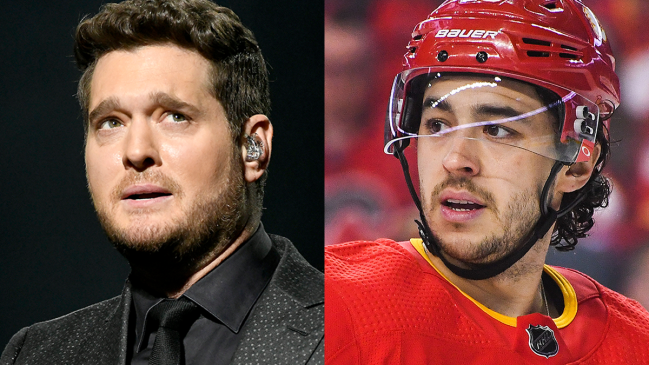 The Calgary Flames had one of their better campaigns in recent memories last season after finishing at the top of the Pacific Division before falling to the Oilers in the second round of the Stanley Cup Playoffs. Unfortunately, it didn’t take very long for things to start to fall apart.

The team lost two fairly essential members of its core in the offseason: Matthew Tkachuk was sent to the Panthers in a blockbuster trade after informing the franchise he had no plans to sign a new contract as a free agent, while Johnny Gaudreau took a pay cut by rejecting a new deal in favor of signing with the Blue Jackets (despite his rocky relationship with the cannon in Columbus).

The Boston College product was subjected to a fair amount of backlash from fans—including a Calgary news anchor who seized on the chance to chirp him during a broadcast—and now, he has to deal with ending up in the crosshairs of the Canadian man, myth, and legend who is Michael Bublé.

On Monday, Bublé (don’t forget the accent mark when you spell the man’s name) stopped by Gaudreau’s former home while performing at Scotiabank Saddledome in Calgary.

Like many Canadians, the crooner and Christmas Music King who was born outside of Vancouver is a Big Hockey Guy. He may be a Canucks fan, but he opted to cater to the crowd in Calgary by donning a Flames jersey during his set and making some references to the hometown team—including a jab directed at Gaudreau for leaving them behind.