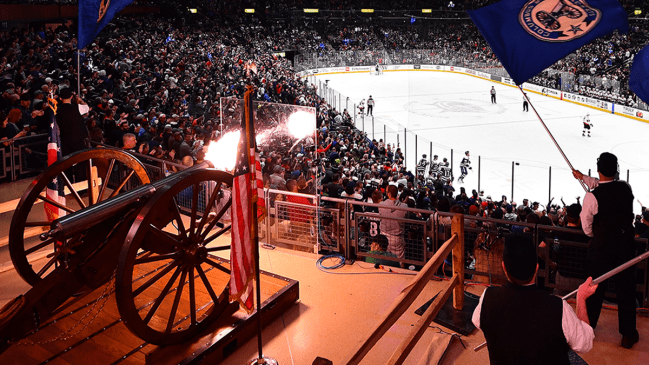 Every NHL team has a celebratory song cued up and ready to blare in tandem with the goal horn whenever the home team manages to put the puck in the net; the Hurricanes pay tribute to North Carolina legend Petey Pablo by blasting “Raise Up” after every score, while Blackhawks fans get a chance to belt out “Chelsea Dagger” whenever a Chicago player triggers the red light.

However, it’s very hard to top what the Blue Jackets have on tap inside Nationwide Arena thanks to the cannon that gets set off after a goal (a piece of weaponry that’s also been triggered prior to puck drop and after every victory since being installed atop Section 111 in 2007).

There’s only so much you can do to prepare for the 105-decibel blast that has caught plenty of players and fans off guard over the years. That includes a new member of the Blue Jackets who made his preseason debut in Columbus on Sunday and may need some time to adjust to his new environment based on what he had to say following his club’s victory over the Penguins at home.

Over the summer, Johnny Gaudreau spurned an offer from the Flames to remain in Calgary in favor of signing a $68 million contract with the Blue Jackets that will theoretically keep him in Columbus for the next six years.

It didn’t take long for fans to point out the Boston College product has a somewhat rocky relationship with the cannon, as he was visibly startled when it went off during pregame warmups ahead of a matchup against his future team in 2018.

The cannon got plenty of use in the Blue Jackets’ 5-1 win against Pittsburgh, and after the contest, the man known as “Johnny Hockey” (who posted three assists in the showdown) hinted he’s going to need a bit more time to get settled after admitting the cannon “got him” on two separate occasions on Sunday.

Johnny Gaudreau said the cannon got him twice tonight — after the first goal and then the postgame blast as the team was celebrating the win. He didn’t know that one was coming. #CBJ

When you consider Gaudreau netted 45 goals last year while racking up 75 assists with the Flames, it’s safe to say his contributions will likely result in the cannon keeping fairly busy this season, so here’s to hoping he can get used to the booms sooner rather than later.