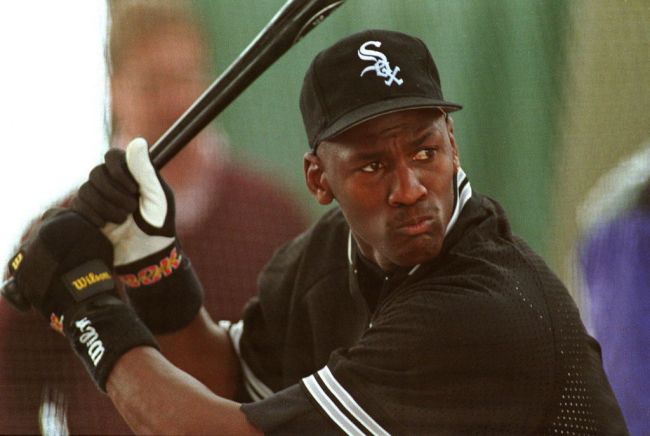 “Amazing” isn’t the word I’d normally use to describe the things you typically come across when clearing out your car unless you think there’s something particularly awesome about crumpled up fast food wrappers, receipts you said you didn’t need but that the cashier insisted you take anyway, and the 67 cents in loose change you could’ve been earning valuable interest on for months if you’d bothered to tidy up sooner.

With the possible exception of a pair of gas station sunglasses tucked beneath your seat, an assortment of coins is usually the most valuable thing you forgot you had sitting inside your ride. However, according to USA Today, Los Angeles-based actor and stuntman Tony Todd managed to go 13 years before remembering he had something in the trunk of his car that’s worth a bit more: a baseball bat autographed by Michael Jordan.

Todd may not have the same celebrity status as the prolific Candyman star of the same name but he’s managed to do pretty well for himself since kicking off his Hollywood career when he played Minnesota Twins second baseman Mickey Staples in 1994’s Little Big League, the movie where a 12-year-old stumbles into the role as the owner and manager of the team (not to be confused with Rookie of the Year, the one where a 12-year-old becomes a pitcher for the Cubs that was released the previous year because “kids and animals having prominent roles on sports teams” was an all-but-guaranteed formula for success during that decade).

25 years ago today #littlebigleague was released. I was cast 2 play the role of #mickeyscales.. I just want 2 thank everyone @castlerock 4 giving a kid from #santa Monica a great opportunity..@mlb @ESPN @sportscenter @Twins pic.twitter.com/tsmzDjPpdU

Todd met a number of MLB stars while filming the movie, and based on the photos he’s posted on Twitter over the years, he’s become pretty tight with a bunch of baseball greats.

Another one of me and Ken Griffey Jr

Congrats to Sandy Alomar Jr on being named the @indians new interim manager!

Happy birthday to my buddy & one of the greatest center fielders to play the game… @Kenny_Lofton7 pic.twitter.com/HBY2O5t0

Congrats 2 my buddy @JoeCarter_29 on his new job with the Arizona diamondbacks.@Dbacks what a great hire. pic.twitter.com/GiMemXrYhq

Happy b-day 2 my friend and 1 of the nicest guys in the game @toriihunter48 pic.twitter.com/h2RPz66y

However, he also got the chance to briefly rub shoulders with a basketball legend who decided to give the whole baseball thing a shot in the form of Michael Jordan, who was in Arizona playing minor league ball for the Scottsdale Scorpions in the fall of 1994 when Todd got an invite to the clubhouse after a game. Jordan apparently recognized him from Little Big League and gifted him a signed bat before inviting him to hit the town with him and Charles Barkley later that night because the actor has a cooler life than you ever will.

Happy 50th B'day to the greatest B-Ball player of all time: Michael Jordan! RT if you agree. p.s. Thanks for the bat! pic.twitter.com/iM7foNML

While that tweet would lead you to believe Todd knew he had the bat in his possession in 2013, he maintains that he forgot about it until earlier this year when The Last Dance aired and a friend reached out to ask him if he still had it. It was at that point he realized it had been sitting in the trunk of the 1966 Pontiac LeMans for 13 years (even though that car was apparently restored by the cast of the show Overhaulin’ at some point early last decade—which his childhood friend Charlie Sheen was somehow involved in. Like I said, he’s had a pretty dope life).

Thank You again #Overhaulin' for this masterpiece!@charliesheen

Great day hanging in the @reds locker room with my man @charliesheen pic.twitter.com/VrY1XbBi

While I can’t vouch for the veracity of the story concerning how Todd allegedly rediscovered the “forgotten” bat, I can confirm he’s decided to put it up for an auction that will kick off on Saturday, where the bidding will start at a cool $10,000.

When you consider a baseball Jordan signed when he was 13 sold for $36,000 over the summer, it’s safe to assume Todd will be pretty pleased when everything is said and done.