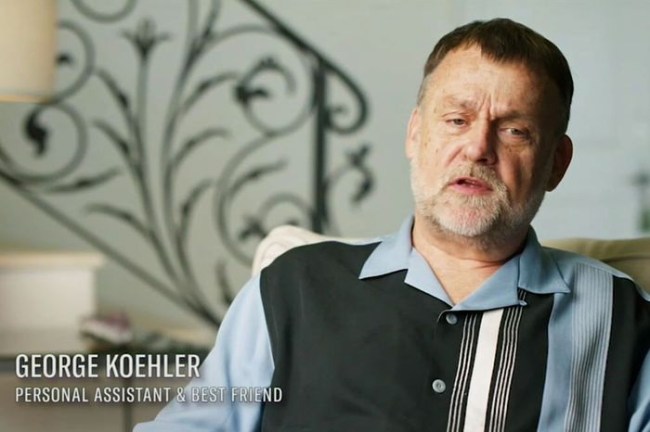 If you asked me in March who I’d guess Michael Jordan’s best friend is, I would guess Charles Barkley, , Magic, or a Cuban cigar.

My 3,827,282 guess—right behind Bugs Bunny—would be George Koehler, a man who looks less like the main confidant to the greatest athlete to ever live and more like the third strongest performer in your local bowling league.

Koehler may be the only man featured in The Last Dance who MJ hasn’t eviscerated to some degree, so I decided to take a deep dive into the origin story of the GOAT’s “personal assistant and best friend.”

A 1991 story in The Times of Northwest Indiana dug up by Vulture describes Koehler’s job as “chauffeur, body guard, advisor, companion at promotional and public appearances, confidant, Ping-Pong partner and personal assistant, among a dozen other functions.”

The two met by nothing more than dumb luck in late September 1984, just months after a 21-year-old MJ had been drafted by the Chicago Bulls. Koehler, then 29, had started his own limo company and was cursing at himself when his client never showed at O’Hare airport.

“I had just spent 45 minutes parking the car, not to mention paying for parking,” Koehler recalled in an ESPN Chicago article a few years ago. “Finally, the pilots got off the plane and I asked one of them if there was anyone else aboard and he said, ‘Just one more guy. He’ll be off in a minute.’

“I waited a few more minutes and then down the tunnel walks Michael.”

When Jordan emerged, Koehler made a mistake that Jordan would typically use as bulletin board material to destroy his limo company.

“I was excited because I knew who he was and I thought, ‘Holy smokes, it’s Larry Jordan,’ ” Koehler said. “I played four years in high school with a guy named Larry Jordan so that name was stuck in my memory bank.

When I saw Michael, I said, ‘Larry Jordan.’

(A mere coincidence that Michael has an older brother named Larry).

Koehler then told Michael he’d drive him anywhere he wanted to go for $25, and ended up driving a “nervous” MJ to the Lincolnwood Hyatt House, minutes from the Bulls practice facility.

“I told him, ‘If you need to know of any places to live, restaurants to eat, you want to go out for a beer, you’ve got a friend in Chicago. And oh, by the way, congratulations on your gold medal.'”

“And he’s like, “Dumb [expletive delete], it’s Michael Jordan.’ I could hear him grinning.”

1984: George Koehler went to the airport to pick up a passenger who never showed up. A guy named Michael Jordan just got off the plane & needed a ride. George charged him $30 & has been by his side ever since 💯 #TheLastDance

The two then struck up a handshake deal after Michael assigned Koehler to pick up his parents from the airport the next day.

“We became friends that way,” Koehler said. “And 25 years later I don’t drive the limo for him, but we’re still really close friends. I’ve met just about everyone under the sun through Michael. If you picked up a book about Michael’s life, it would be my life, just Michael’s name on the cover. I don’t know if you believe in fate, but I obviously do. My whole life could’ve been different if my customer had showed up that day.

“Michael likes to tell the story and say, ‘George was the first person I ever met in Chicago. He gave me a ride and has taken me for a ride ever since.'” [via ESPN Chicago]

TL:DR: George Koehler was a saint in a previous life and has been rewarded in this one.