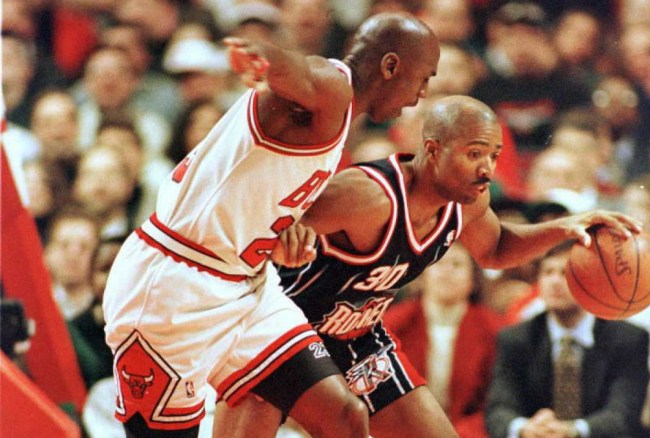 Michael Jordan led the Chicago Bulls to six NBA titles during the ’90s, giving the franchise the distinction as the team of the decade for their dominance. While MJ’s pretty much known as the GOAT for all that he accomplished on the hardwood during his career, there’s a major “what if…?” question that surrounds his playing days with the Bulls: What if Jordan hadn’t retired in 1993 to pursue a baseball career? And what if he never returned to the NBA?

While we’ll never know what would’ve happened had Michael Jordan stayed atop the league during the 1993-94 and 1994-95 NBA seasons, there’s always been a belief that the Bulls would’ve just went on to win two more titles. But TNT analyst Kenny Smith — who won two titles during the years MJ was either out of the league or just working himself back into shape following his return in 1995 — suggests Chicago wouldn’t have easily been crowned champs.

Recently talking to ESPN’s Stephen A. Smith, Kenny Smith described why he believes Jordan’s Bulls wouldn’t have added to their legacy, citing one simple reason: The team’s lack of size. See below for Kenny Smith’s reasoning.

First of all, [Jordan] was wearing number 45, the year that they lost. And he was actually in the league. People forget that. But they were just too small. No Horace Grant. He was in Orlando. Dennis Rodman was still in San Antonio. That’s why they lost to Orlando Magic.

It might seem like an outrageous thought given Michael Jordan’s dominance during his run with the Bulls in the ’90s, but Kenny Smith was simply answering Stephen A.’s hypothetical question about how the Rockets would’ve fared had the two teams met in the NBA Finals. With Hakeem Olajuwon at the top of his game during MJ’s exodus, and Chicago’s lack of big men on the roster, the current TNT analyst makes a strong case for why winning a couple more titles would’ve been anything but a cakewalk for the Bulls.

Remember, without Jordan during the 1994 season, the Bulls couldn’t defeat the Patrick Ewing-led New York Knicks. And, even when MJ did return in 1995, Chicago still didn’t have enough size on the roster to defeat the Shaquille O’Neal-led Orlando Magic — so Kenny Smith might be right in his opinion here.

Unfortunately, we can’t go back in time to really get an answer, but, regardless of the TNT analyst’s claim and Chicago’s lack of size at the time, who would really bet against Michael Jordan and his ruthless competitiveness? Not many people — so, think what you want to, but I’m still choosing His Airness over everybody else.