What If Michael Jordan Never Returned To The Bulls In 1995? A Deep Dive Into How The NBA Would’ve Played Out 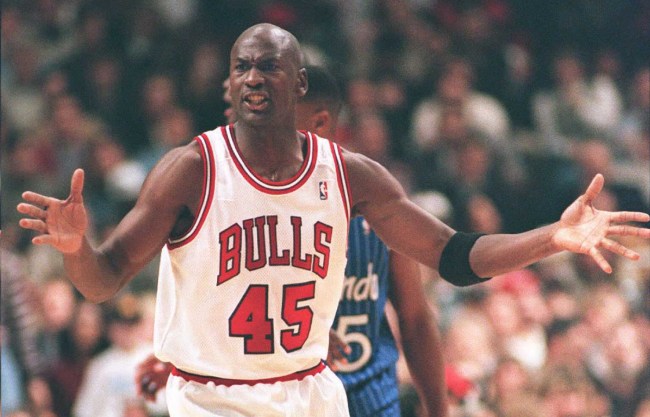 Michael Jordan returned to the Chicago Bulls in 1995 with a simple memo to the NBA that read “I’m back,” causing an explosion in the sports world that couldn’t be believed. But here’s a what if question that needs to be discussed: What if MJ never came out of retirement that first time? What if he had stuck with trying to play baseball? What if the Bulls broke apart the core of their roster? How would the NBA landscape have changed?

It’s something we all deserve an answer to, and it’s why I’m laying out the exact things that would’ve happened in the NBA had MJ stayed retired 25 years ago — trust me, I’m a genius.

When Michael Jordan made his first appearance for the Bulls since announcing his comeback against the Indiana Pacers on March 19, 1995, many fans might forget how bad Chicago really was. Prior to that contest, the Bulls were a mere 34-31, and needed a three-game win streak heading into the game to even crack the .500 mark.

Of course, MJ changed all that, guiding his Bulls to a 13-4 record down the stretch to snag the No. 5 seed in the Eastern Conference, and, ultimately, leading them to a second-round appearance (where they lost to the Orlando Magic in six games).

However, had Jordan never comeback in 1995, the prediction here is that Chicago would’ve dropped to the No. 7 seed, and would’ve had a quick hook in the postseason while playing the No. 2 seeded Pacers. Indiana would’ve easily wiped the Bulls out in three games (as the first-round was a best-of-five), and the rebuild would’ve been in full effect.

And, During The Offseason, The Bulls Would’ve Traded Scottie Pippen To The Seattle SuperSonics

For years during the ’90s, there had been rumors about the Bulls exploring trades involving Scottie Pippen — who, alongside Michael Jordan, was a catalyst of the six championships during those eight seasons. Hell, Pip even asked for a trade on national TV, seen above. In the 1995 offseason, he finally would’ve gotten his wish.

After the (presumed) early exit in the ’94-95 playoffs the year prior, a deal would finally get done in the offseason; which would’ve slammed the door shut on any possible return to the hardwood by MJ.

Trading Pippen would’ve also signaled the end for head coach Phil Jackson’s time with the Bulls, sending the 1995-96 team — which, in real life, went 72-10 and won the first championship of their second three-peat — into the lottery. Finally, the running of the Bulls would come to an end; and a dynasty in the latter half of the decade would’ve been eluded.

While the Bulls ultimately ended up beating the Seattle SuperSonics in the 1996 NBA Finals, winning in six games, fate would’ve been different had Michael Jordan never returned to the Bulls a year prior. In fact, it would’ve been the Sonics who won a couple titles before the end of the decade.

Here’s a quick history lesson: During the summer of 1994, the Bulls and Sonics had already been in deep trade talks which involved both Scottie Pippen and Seattle star Shawn Kemp — who were the two cornerstones of a potential deal. While things evaporated that offseason, the two teams would’ve picked up conversations again during the ’95 offseason, this time getting a deal done.

Teaming Pippen with the 1995-96 Defensive Player of the Year (and fellow future Hall of Famer) Gary Payton, Seattle would’ve been the head of the class in the NBA, mixing a potent offense (ranked second in the league in points per game in ’95-96) with a lethal defense alongside their two superstars. Seriously, who could’ve matched a defensive duo of Payton and Pippen? Uh, nobody, as both were capable of shutting down the best player on an opposing team.

During his Hall of Fame hoops career, Reggie Miller was always so close to getting over the championship hurdle. Unfortunately, whether it was running into the New York Knicks, Michael Jordan or, eventually, a tandem of Shaquille O’Neal–Kobe Bryant, Miller never got the chance to hoist the Larry O’Brien Trophy.

But had Michael Jordan never made a comeback in 1995, Miller would’ve gotten that elusive title.

The 1997-98 Pacers — which won 58 games during the regular season and finished No. 3 in the Eastern Conference — were the one team that pushed Jordan’s real-life Bulls the hardest during their dynasty, forcing the ’98 Eastern Conference Finals to a Game 7. It would’ve never gotten to that point without Jordan, though.

Instead, the Pacers would’ve advanced to the 1998 NBA Finals to play against Karl Malone, John Stockton and the Utah Jazz — which would’ve been an epic showdown of superstars hunting for a first title.

It’s hard to imagine the Malone-Stockton tandem not reaching at least one NBA Finals during their run together, so, even with the aforementioned Sonics prediction, the Jazz would’ve found a way to beat Seattle to win the West in ’98. It’s too bad Reggie Miller and a hungry Pacers team would be waiting, though, as Miller and his gritty teammates would’ve found a way to walk away as champions.

Remember when Kobe Bryant said (joked?) during one of his final interviews before his tragic death that he and Shaquille O’Neal “would’ve had 12 f*cking rings” had the big fella been in the gym more often? While it may have been laughed off at the time, had Michael Jordan never returned to the Bulls in 1995, it actually might’ve happened.

After the Scottie Pippen-Gary Payton led Seattle SuperSonics *won back-to-back titles in ’96 and ’97, that franchise saw its window of opportunity slam shut, as Pippen demanded more money and ended up being dealt to the Houston Rockets in a sign-and-trade (which happened in real life prior to the lockout shortened 1999 season anyway).

With the Western Conference now wide open, Shaq, Kobe and the Lakers make a run at their first title together, beating the Miami Heat in seven games in the 1999 NBA Finals. But the fun was only starting to begin for the iconic duo, as the Lakers’ tandem gained respect for and chemistry with one another a couple of years earlier than they did in real life, and were able to win an astonishing five-straight titles.

Michael Jordan Never Plays For The Washington Wizards, But He Does Become GM Of The Chicago White Sox

The NBA’s been a young man’s league since Michael Jordan retired in 1993, and any urge of playing hoops again had long vanished. Let’s face it, if MJ wasn’t returning after 19 months away from basketball in 1993 during his stint playing minor league baseball, he was never coming back.

But that’s where the story gets really interesting, because, instead of focusing on a second and third act in the NBA, Jordan would’ve solely given his attention to baseball.

Instead of ever coming out of retirement and leading the Bulls to three-straight NBA titles from ’96-98, or returning to the league again in 2001 with the Washington Wizards, Jordan’s love for baseball led him to a front office job with the Chicago White Sox instead.

The MLB franchise, which has been owned by Jerry Reinsdorf since 1981 — the same Jerry Reinsdorf who adored Jordan enough to pay him his full Bulls salary during his baseball hiatus in the first place — was also the organization that Jordan attempted to play for as an outfielder. While MJ may have actually been better on the diamond than originally thought, the fact of the matter was he was 30 years old in 1993 and just starting to make a run at the big leagues.

With Father Time against him, Jordan would float between the minor and major leagues, playing baseball until he was 34 years old before focusing on a career as a team executive. Similar to how he worked his way up the front office ranks with the Washington Wizards prior to his return to the court with the team, Michael Jordan was given a chance by his longtime friend Reinsdorf to oversee baseball operations for the White Sox.

So how would all of this have impacted Michael Jordan’s legacy and his status as the presumed GOAT? Seeing as how he would’ve “only” won those three-straight titles with the Bulls from ’91-93, he would’ve gone down as a top-10 player in league history, but would’ve been replaced by Kobe Bryant as the greatest player the league had ever seen — with LeBron James nipping at his heels.