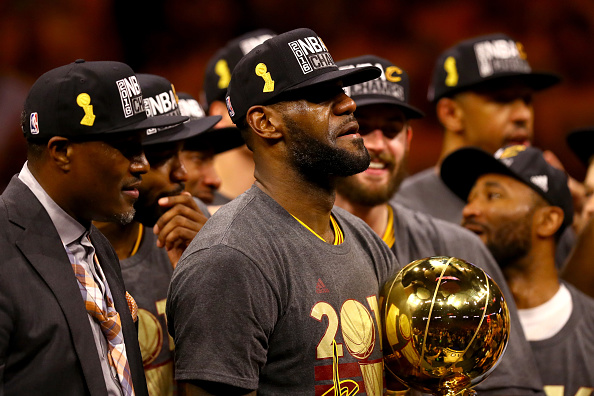 The debate about who the greatest basketball player of all-time will be forever debated even after LeBron James retire. Many feel Michael Jordan will forever be considered the GOAT considering that he went 6-0 in the finals while others believe that LeBron has surpassed him with his unbelievable play despite his shortcomings in the playoffs while playing with inferior players.

LeBron has mostly kept his opinion about the GOAT debate to himself until today where he told a group of friends on ESPN’s ‘More Than Athlete: show that he feels he became the greatest of all-time after beating the 73-9 Warriors in the finals.

LeBron believes he is the GOAT for beating the 73-9 Warriors.
(VIA @uninterruptedpic.twitter.com/zPFsK2Rj69

Man said hes the greatest of all time because he won 1 RING for cleveland while going to the finals 4 times as a CAV giving them their first championship 💀 with that logic he just proved Jordans the GOAT bcz Jordan won the Chicago their 1st 2nd 3rd 4th 5th and 6th championship pic.twitter.com/ing6xws75U

the GOAT does not need to say he is the GOAT.

Wake Up out that Dream Fresh Prince!!🤣😂🤣😂🤣😂 KING👑JORDAN IS THE G.O.A.T🐐 pic.twitter.com/iBqD2wQvLU