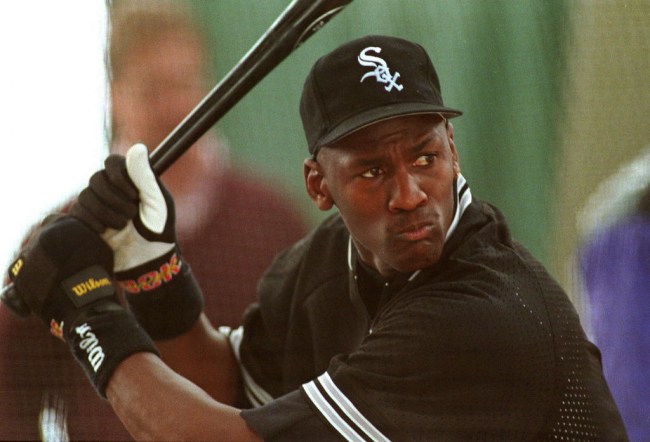 A little over a year after Deion Sanders suited up for the Atlanta Falcons before hopping on a plane to join the Braves in Pittsburgh to play in an NCLS game on the same damn day, Michael Jordan shocked the world when he announced he was retiring from basketball, saying he no longer had any desire to play the sport.

The following February, we learned that he did, however, have an interest in pursuing a career in professional baseball, and shortly after, he headed down to Florida for spring training as a member of the Chicago White Sox organization and eventually found himself in Alabama, where he made his minor league debut with the Birmingham Barons the franchise’s Double-A affiliate.

Plenty of people were skeptical of Jordan’s pivot—including Sports Illustrated writer Steve Wulf, who penned the now-infamous cover story that led to the NBA legend cutting all ties with the magazine for implying he and the White Sox were making a mockery of baseball with what could understandably be viewed as a publicity stunt.

Sports Illustrated put this on its cover when Jordan was playing baseball. MJ never spoke to them again. pic.twitter.com/CoTQjiSpBc

Terry Francona recently revealed he believes Jordan could’ve made it to the big leagues if he hadn’t returned to basketball, but based on the numbers he was rocking when he opted to swap his cleats for sneakers, he would’ve had to seriously up his game, as he posted a batting average of .202 while hitting three home runs over the course of his 127-game career.

Sure, those numbers aren’t terrible when you consider he hadn’t played competitive baseball since high school but it’s incredibly doubtful anyone not named “Michael Jordan” would’ve gotten almost 500 at-bats with that kind of stat line. “Embarrassing” may also be a bit harsh when it comes to describing his performance but you have to admit Wulf wasn’t entirely off the mark when it came to predicting how things were going to play out.

However, according to NBC Sports, he regrets how things went down over 25 years ago, pointing a fair amount of the blame at Sports Illustrated for the headline they opted to use while also acknowledging he may have overdone it when it came to his criticisms of Jordan:

“The headline was over the top. And I know SI thought, ‘Well, we put him on the cover so many times. What’s the big deal about this?’ Well, you know what, we disrespected him.

“Going back and reading my original story, it was snarky. And I was pretty hard on him. But it certainly didn’t match the headline that Sports Illustrated put on the cover. I did acknowledge in the story that he was working hard and that he was willing to go from being ‘The Guy’ to being one of the guys. He was pursuing a dream, which was great.

But at the time, I didn’t see any real natural ability. That’s basically the story I wrote.”

He also talked about the story with ESPN and shared some similar thoughts.

Wulf initially attempted to get editors at Sports Illustrated to publish an apology he wrote after the article went to press but had his request denied, although one did eventually appear in ESPN The Magazine back in 2001.

It takes a big person to acknowledge when they’re wrong, and even though I personally don’t think Wulf has much to apologize for here, props to him for doing what he can to right what he feels was wrong.