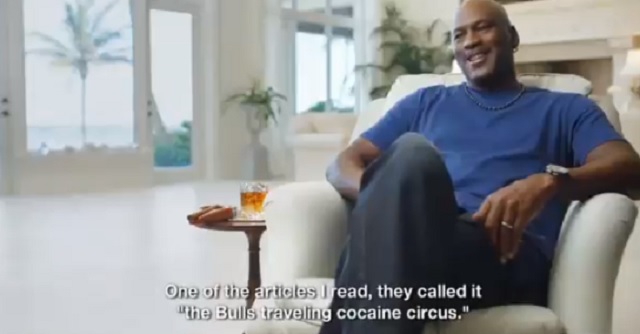 On Sunday night, ESPN released the first two episodes of their 10-part “Last Dance” documentary on the 97-98 Chicago Bulls.

The first chapter of the Bulls story went into Michael Jordan’s jump from the University of North Carolina to the NBA.

Jordan talked about how he went from a “clean program” in North Carolina to a team for which did a ton of drugs and was dubbed the “the Bulls traveling cocaine circus”.

Michael Jordan talks about walking in on Bulls cocaine party as a rookie #TheLastDance pic.twitter.com/rA0RTb2wrY

Look, guys were doing things that I didn’t see. I had one event, preseason, I think we were in Peoria. It was in the hotel, so I’m trying to find my teammates. I started knocking on doors. I get to this one door, and I knock on the door and I can hear someone says, “Shh shh shh, someone’s outside.” And then you hear this deep voice say, “Who is it?” I say, “MJ.” And then they all say, “Aw f*ck, he’s just a rookie, don’t worry about it.” So they open up the door, I walk in and practically the whole team was in there. And it was like, things I’ve never seen in my life as a young kid. You got your lines over here, your weed smokers over here, you’ve got your women over here. So, the first thing I said, “Look, man, I’m out.” Cause all I can about think is, if they come and raid this place right about now, I am just as guilty as everyone else that’s in this room. And from that point on, I was more or less on my
own.

The Internet had a good laugh about the Bulls’ traveling cocaine circus.

“Bulls Traveling Cocaine Circus” needs a spinoff or its own album cover immediately.

Every member of the 1984-85 Bulls watching in their living room is right now explaining to their family that they weren't in the cocaine circus.

Traveling cocaine circus 😂😂😂😂 folks were definitely partying like that back in the 80s.

When the guys asked MJ about them being “The bulls traveling cocaine circus” #TheLastDance pic.twitter.com/imybolGJSg

The Traveling Cocaine Circus? Even the Jail Blazers like damn that’s cold. pic.twitter.com/WmCKPCYYFK