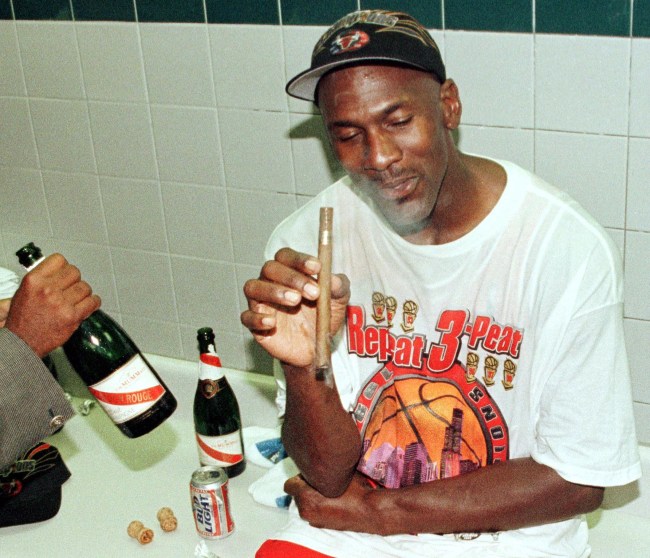 Michael Jordan broke the hearts of so many NBA superstars during his peak in the ’90s that it’s almost unfair. Not only did MJ talk mad trash to get into the minds of some of the best players of all-time — with the stories being absolutely legendary — but he and the Chicago Bulls prevented a ton of guys from ever getting a championship.

When thinking about some of the biggest names in the league during the ’90s, names like Charles Barkley, Patrick Ewing and Reggie Miller, among others, often come to mind. These guys are all in the Hall of Fame, but, of all the things they accomplished, there’s one glaring hole on their resume: an NBA title.

That got me thinking: Who were the biggest NBA superstars who never won a title during Michael Jordan’s playing days? After some thought and debate, I was able to land on a few guys who could never overcome Jordan’s wrath. And, remember, these are guys who didn’t win a championship while MJ was at his peak, not after he left the Chicago Bulls — since I’m a believer in beating the best to become the best.

Forget about everybody else who’s going to be on this list for a minute, because the duo of Karl Malone–John Stockton might have the biggest gripe of anyone. That’s because, in back-to-back seasons, the iconic Utah Jazz players had a chance to knock off MJ’s Bulls, but failed to do so in both 1997 and 1998 — even as Jordan battled the flu in one of the games in the first matchup.

Sure, there are other names who couldn’t eliminate Michael Jordan in the playoffs, but Stockton and Malone had the biggest stage to prove they were better — and they couldn’t get the job done. As the only two times the tandem reached the NBA Finals together, that has to still sting.

Sure, Shaquille O’Neal may have ended up winning four NBA titles later in his career, but while Michael Jordan and the Bulls were in the midst of their dynasty in the ’90s, Shaq’s time was put on hold. That’s not to say MJ’s squad had everything to do with O’Neal not winning — after all, the Orlando Magic did eliminate the Bulls in the second round of the 1994-95 season — but that came a few months after Jordan returned from his hoops hiatus, so it comes with a small asterisk.

Bottom line is this: O’Neal had already proven that he was the most ferocious player in the league during MJ’s title run, and, as much as he dominated down low, he could never get over the hump of beating the real Jordan. Proof of that came in 1995-96, when Chicago swept Orlando in the Eastern Conference Finals; which helped pave the path for Shaq’s departure to the L.A. Lakers that offseason.

Charles Barkley had a real chance at knocking off Michael Jordan and the Bulls in the 1993 NBA Finals — with Chicago needing a last-second three from John Paxson to close out their third-straight title in Game 6 — but, even then, would anyone had bet against MJ had the series reached a seventh game? Doubt it.

Barkley won the league MVP that season, his first with the Phoenix Suns, and was already a top-5 player in the NBA at the time. Still, when matched against Jordan and the Bulls, Sir Charles stood little chance, as his own (still impressive) stats couldn’t hold a flame to MJ’s stats during that NBA Finals.

Going up against anybody else, Barkley’s numbers would look amazing. But this is the great Michael Jordan we’re talking about, and he wasn’t going to let anyone else stand in his way of building on his legacy.

Who knew how much Reggie Miller hated Michael Jordan? While the two never showed a whole lot of love towards one another, MJ was rarely ever friendly with his opponents, so it just seemed par for the course.

But once Jordan criticized Miller’s tactics and style of play, that’s when things went to another level, with the six-time champ saying the below during a feature story for ESPN the Magazine in 1998.

“I don’t really dislike anybody in the league, but playing Reggie Miller drives me nuts. It’s like chicken-fighting with a woman. His game is all this flopping-type thing. He weighs only 185 pounds, so you have to be careful, don’t touch him, or it’s a foul. On offense I use all my 215 pounds and just move him out. But he has his hands on you all the time, like a woman holding your waist. I just want to beat his hands off because it’s illegal. It irritates me.”

Fast-forward to present time, Miller recently said he’d probably punch Jordan in the face if he saw him, which only proves the rivalry between these two was intense AF back in the day — even if MJ’s Bulls always got the best of the Pacers.

Still, the 1998 Pacers may have scared the Bulls the most of anytime during their run to six championships, as Indiana forced a Game 7 in the Eastern Conference Finals that nearly dethroned Chicago. Literally, it took Jordan shutting down Miller in the fourth quarter for the Bulls to win and march onto the NBA Finals that season.

While Reggie Miller did lead his Pacers to the NBA Finals a couple seasons later — losing to the Los Angeles Lakers — he never got a title for himself. And, during his lone postseason opportunity to knock off MJ, the sharpshooter flopped harder than he did during games.

Michael Jordan has said that, while Clyde Drexler was a threat during the Bulls’ championship run, it actually pissed him off being compared to his former Dream Team teammate by the media — and, surprise, he used it as motivation to try and beat Drexler anytime the two matched up against one another. The full MJ quote is below.

Michael Jordan and Clyde Drexler were considered two of the best players in the league during the 1992 NBA Finals. MJ wasn’t having that.

There was no bigger stage for Jordan to prove that he was better than Drexler than during the 1992 NBA Finals, where the two found themselves going against each other. As we all know, Chicago got the best of the Portland Trail Blazers that series, with MJ outplaying his superstar counterpart during the six-game showdown. Take a look at their stats from the ’92 Finals below.

Now, everybody basically remembers the shrug game — when Jordan hit six threes in Game 1 and shrugged back towards the camera as if to ask, “Who knew?“ — but the game MJ really proved to be better than Drexler was Game 5, when he took over and dropped a cool 46 points on just 23 shots on the road when the series was tied at two apiece. The opportunity was there for Drexler to overtake MJ.

Drexler would later get a ring with the Houston Rockets during the 1994-95 season — which, technically, came when Mike was back in the league — but, like the aforementioned Shaquille O’Neal, Jordan wasn’t yet back at his peak following his layoff to play baseball, so it kind of comes with an asterisk. Bottom line: Drexler had a chance to beat Michael Jordan head-to-head and couldn’t do it.

Want to talk about a superstar in the ’90s who had really bad luck against Michael Jordan and the Bulls? Then the first person someone might think of is Patrick Ewing, who always seemed to be the bridesmaid to the Bulls’ wedding anytime the playoffs rolled around.

One of the fiercest rivalries during Chicago’s title runs, Ewing’s New York Knicks were every bit as talented, every bit as hungry and every bit as tough as the Bulls, but they lacked one thing: Michael Jordan.

Facing off against one another five times in six seasons during the ’90s — which included a seven-game series during the 1993-94 season when Jordan was off playing baseball — New York never knocked an MJ-led Bulls team from the playoffs. That will forever be the lasting legacy of Ewing and the Knicks, as His Airness often saved his best performances for the bright lights of New York.

Truth be told, the Seattle SuperSonics of the mid-’90s always seemed to underachieve. That’s not meant to be a knock on them, but, given the fact they featured two consistent All-Stars — Shawn Kemp and Gary Payton, who were surrounded by plenty of talent like Ricky Pierce and Detlef Schrempf — the Sonics didn’t squeeze the most out of their talent.

Still, Seattle did find themselves in the 1996 NBA Finals against Jordan and the Bulls, so one can’t argue Kemp and Payton at least experienced the biggest stage once during MJ and Chicago’s title run.

However, as he did to many other stars throughout the ’90s, Michael Jordan brushed aside the Sonics’ athletic duo, leading the Bulls to a 3-0 series lead before disposing of Seattle in six games. The title capped the historic 72-win season for Chicago, and served as the official welcome back party for Jordan after his brief retirement — since it was his first full season back.

You guys might remember a little something called “The Shot,” which came in Game 5 of a 1989 Playoffs series between the Chicago Bulls and Cleveland Cavs. Michael Jordan’s now iconic game-winner over Craig Ehlo came in the middle of a serious rivalry between the two teams that Cleveland could never quite win — and it helped prevent All-Star guard Mark Price from ever playing in an NBA Finals.

What’s interesting about the 1989 first-round series between the Bulls and Cavs is this: During the regular season, because both teams resided in the Central Division, they played one another six times; with Cleveland winning each meeting before the postseason matchup. Seriously, Chicago entered the playoff series as underdogs.

As for Price, he was the catalyst of those late-80s, early-90s Cleveland teams, which reached the postseason in six of the seven seasons from 1987-1994, with the sharpshooting point guard earning an All-Star Game spot four times in his career. Unfortunately, in all but one of the team’s six playoff appearances during that stretch, they ran into Jordan and the Bulls; and each time Chicago eliminated Cleveland.

With all that talent around Price and the success they had during the regular season, who knows what would’ve happened had Jordan and the Bulls not stood in Cleveland’s way in the playoffs.

People forget just how good Glen Rice actually was during the ’90s, and, while he was never quite at superstar level like some of other names listed here, he was a prolific scorer and three-time All-Star, so it’s hard to keep him off this list.

Rice went from playing for the Miami Heat to being the star on the Charlotte Hornets beginning in the 1995-96 season. Although his Hornets missed the postseason that year, the roster included seven guys who averaged at least 11.2 points per game. When Charlotte got its chance against the Bulls a couple years later in the playoffs — which included six players averaging at least 10.4 points per game — they didn’t stand a chance.

Although Rice could fill it up with the best of ’em back then, when it came to going head-to-head with Jordan, he never could take the leap into elite status.