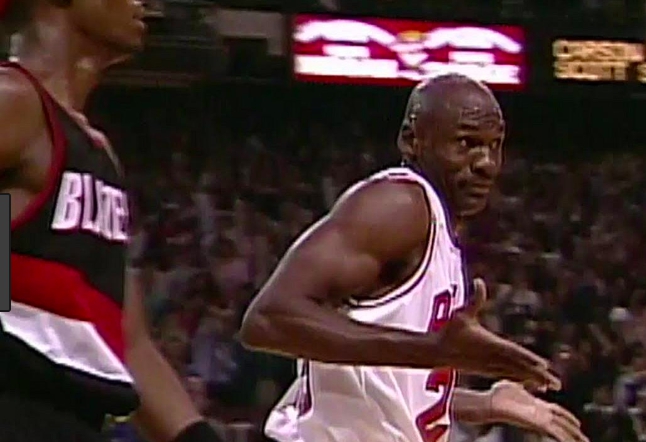 It’s been 26 years since the Jordan ‘shrug’ game and still it remains one of the most iconic moments in the game’s history. In Game 1 of the 1992 NBA Finals against the supremely talented Portland Trail Blazers, Michael Jordan drilled six straight threes to go along with 35 points….in the first half–both NBA records.

Jordan finished with 39 points in a 122-89 rout, two points shy of matching the most lopsided Finals game ever, and the Bulls would go on to beat the Blazers in 6 games securing Jordan’s second-of-six championship.

Jordan’s motivation to dominate in that game was driven by the worldwide praise Portland’s Clyde Drexler earned himself that season. He was decided by many to be the best player in the world, as of course, that didn’t sit well with the dangerously competitive Jordan.

Check out this fascinating excerpt from David Halberstam’s book, Playing for Keeps: Michael Jordan and the World He Made.

But of course, it was intensely personal for him, the perfect challenge for a man who always wanted and always need challenges, and he used all the comparisons with Drexler, all those nonbelievers who thought Drexler as good as he was, to motivate himself. He set out to do nothing less than destroy, not just Portland, but Drexler as well…

Later, Danny Ainge, who was Drexler’s Portland teammate that year, said that there was a certain inhumanity to what took place on the court in that series. Drexler chose to give Jordan the outside shot in the beginning and Jordan hit six threes in a row … When the Trail Blazers had the ball, Ainge thought, it was as if Jordan had a terrible personal vendetta against Drexler. If it was not personal, it most certainly looked that way. Jordan barely let Drexler touch the ball on offense. Ainge sensed that it was as if Jordan had taken all those newspaper articles and television stories about Drexler as nothing less than a personal insult. It was like watching a killer on the court, he decided, “an assassin who comes to kill you then cut your heart out.”

Jordan and Clyde would eventually become teammates on later that summer on The Dream Team and Jordan emasculating Clyde and the Blazers during the Finals wasn’t sufficient in Jordan’s eyes.

Jordan did not pass up the opportunity to talk some trash as he brought the ball upcourt. “Didn’t I just kick your ass? … Anything here look just a little familiar? … Think you can stop me this time, Clyde? … Better watch out for the threes, Clyde.” Eventually some of his Dream Team colleagues suggested that Jordan cut back on the trash talk with Drexler because they were all teammates now and there was no need to reopen wounds still so fresh. Back off he did, but the coaches noted that every time Jordan guarded Drexler in scrimmages, he took the defensive level up more than anyone else…

Michael reported gleefully to the Bulls’ coaches that one day Clyde Drexler showed up at practice with two left sneakers. Unwilling to admit his mistake and borrow a shoe from someone else or go back and get another one, he went out and played with a sneaker on the wrong foot. To Michael Jordan, who always looked for psychological weaknesses in his opponents, that was a sure sign of Drexler’s insecurity. He carefully filed it away, to be used some other day if necessary.

Can someone tell MJ that he won six championships and Clyde only won one? Nevermind, it won’t matter.