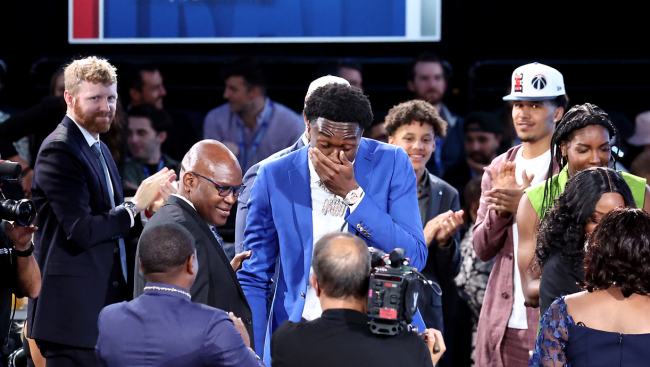 As everyone knows, NBA legend Michael Jordan bleeds Carolina blue. Because of that it has to be tough for him to even consider drafting a player from Duke to play for his Charlotte Hornets.

Not that he refuses to do it. Jordan did take Gerald Henderson in the 2009 NBA draft and Vernon Carey in 2020.

Still, it couldn’t have been easy for His Airness to concede that 7-foot-2 center Mark Williams out of Duke was the best choice for the Hornets with the number 15 pick Thursday night.

Of course, when the Hornets made the call to Williams to congratulate him on being selected, Jordan simply could not resist getting a little dig in at Williams’ choice of colleges.

Williams surely knew what was coming when he was told on the phone that “there’s somebody else who really wants to say hello to you.”

“I’m looking forward to it, man… I hope you’ll get in the gym and start working on your game and make a difference.”

“And een though you’re a Dookie, I take pride in that we did draft you,” Jordan told Williams on the phone.

Talk about your cool moments in life.

Back in 2015, Jordan admitted, “Sometimes it’s hard to put those feelings away. There’s something about our blood that makes it very difficult to choose a Duke player,” adding, “This is a business. Sometimes we have to supersede our feelings.”