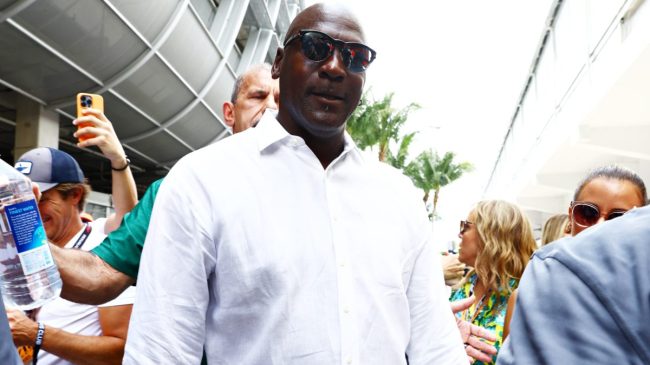 Michael Jordan is the greatest basketball player of all-time, at least to one generation. Every sports fan can point him out of a crowd, and his legend has grown even bigger following the release of The Last Dance.

Jordan averaged over 30 points a game during his 15-year career, playing for both the Bulls and the Wizards. He’s a 10-time scoring champ who never averaged less than 20 points a night. He also led the league in steals three times, and was an iron man on the court, appearing in 80 or more games in 11 seasons.

So, when you see the 14-time All-Star, you document the moment.

On Wednesday, a pair of youngsters waited outside a Charlotte condo building as they hoped to see some of the Charlotte players leaving the arena.

In particular, they were looking for LaMelo Ball.

Instead, Jordan came strolling through the parking lot, and the two kids were absolutely starstruck.

When the two kids realized that they were staring at Michael Jordan, they erupted.

MJ hilariously denies the two youngsters of a photo op, telling them to put the phones down. The biggest of “F You’s.”

It’s not Jordan’s first time saying, “f them kids.” He previously went viral for denying kids a chance at some free shoes while attending a Chris Paul camp. Paul said if Jordan missed three shots in a shootaround, everyone would land some sneakers.

These guys putting in some scouting work for the Monstars rn

Many commented on the fact that they wanted to see LaMelo more than MJ.

Others said that LeBron would never treat a young fan like this.

If LeBron did this, it would be a national crisis

Brutal denial by Jordan but the video and reaction are priceless.