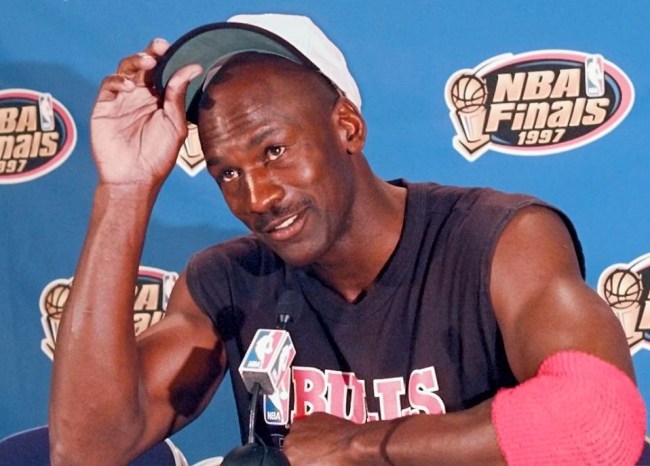 One of Michael Jordan’s most memorable moments during his illustrious career was the “Flu Game,” which came during the 1997 NBA Finals against the Utah Jazz. As the story goes, MJ was fighting a some sort of bug that hit him the night before a pivotal Game 5 matchup, as the series was tied 2-2 and the Bulls were on the road. Should they lose that game, who knows if they end up winning the series; and their fifth title.

Leading up to the game, nobody knew for sure what was going on with Michael Jordan. Was he really fighting the flu? Did he just eat something bad that gave him food poisoning? Did he party hard the night prior and have a massive hangover (a serious theory)? All anyone knew was that MJ was physically beat down, and that was the storyline before Game 5. But this is His Airness we’re talking about, and he wasn’t going to let anything get in the way of balling out.

Well, balled out he did, dropping a cool 38 points, 7 rebounds, 5 assists, 3 steals and 1 block in 44 minutes. The performance was legendary, and it became one of Jordan’s shining moments — especially when considering how the GOAT described his physical state following the clutch victory.

Per an archived NBA.com recap:

“I almost played myself into passing out,” Jordan said after the game. “I came in and I was almost dehydrated, and it was all just to win a basketball game. I couldn’t breathe. My energy level was really low. My mouth was really dry. They started giving me Gatorade, and I thought about IV.”

It’s truly incredible to think Jordan played through all that — and at such a high level. With so many stories about how relentless the dude was as a basketball player, though, this was all just par for the course.

But what really happened to Michael Jordan prior to that Game 5? And, more importantly, why is it referred to as the “Flu Game” if it was probably food poisoning that nearly knocked out the six-time champ? To help answer those questions, Jordan’s longtime trainer, Tim Grover, tried to set the story straight.

Appearing on the Pardon My Take podcast, Grover broke down everything that happened the night before the contest, which included his intuition telling him it about a “bad feeling” about a pizza being delivered to Jordan’s hotel room by five guys. Take a look below at what the trainer had to say.

“One hundred percent it was food poisoning, 100 percent,” Grover said. “But obviously it just sounds better to be the ‘Flu Game’ than the ‘Food Poisoning Game.’”

Jordan downed a couple slices (according to Grover, he was the only one to have the pizza) and crashed. Hours later, Grover got a call.

“Then, about 3 o’ clock in the morning, I get a call to my room that just says, ‘Hey, man, come to MJ’s room’ and he’s literally curled up in the fetal position,” Grover continued. A few slices of Utah ‘za had toppled the GOAT.

“I’ve not known any flu that can hit you that fast, but I know how quick food poisoning can hit you,” Grover said.

“That’s my story, that’s what I observed,” Grover said. “I was in the room when all this was going on, so if anybody had a better look than I did I’d like to see who that person was because they definitely weren’t there.”

Man, that’s pretty remarkable — and funny AF that Michael Jordan didn’t take the warning of Grover prior to eating the pizza that was delivered by five dudes; which is sketchy as hell.

After falling ill and deciding he was still going to play in Game 5, Grover also mentioned the one piece of advice he told Jordan before the contest.

“Once you’re in the game, you gotta stay,” Grover recalled telling Jordan. “You gotta play as long as you freaking can, because once you sit down, that’s it.”

While MJ didn’t listed to Tim Grover about the pizza the night prior, he seemed to listen to his guidance about not sitting down, because Jordan nearly played the entire game, led his team to a victory, and gave everyone another moment that proved the dude was basically superhuman.