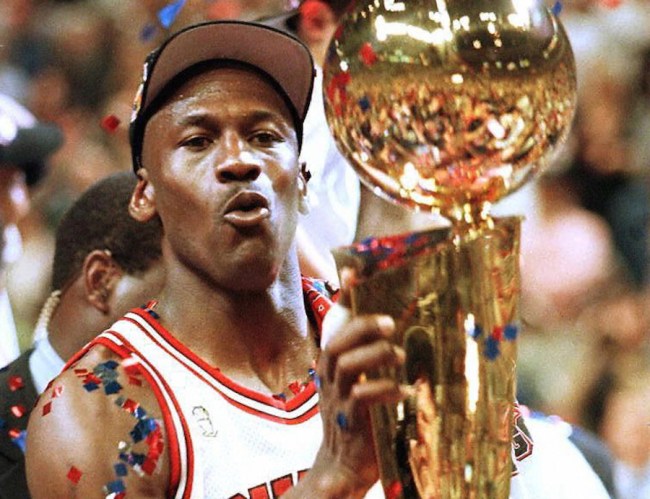 Michael Jordan, arguably, the greatest basketball player we’ve ever seen, turns 58 years old today. So while MJ blows out the candles and eats some cake from his owner’s suite while watching his Charlotte Hornets play, we decided to give him a different kind of honor and celebrate the most lethal trash-talking stories ever heard from those who lived through the six-time NBA champ’s verbal abuse.

We saw the lengths Jordan went with his competitiveness in The Last Dance documentary, but it goes way beyond a few stories about trashing teammates and getting the best of those who dare challenge him.

A fierce competitor who didn’t take crap from anyone, Michael Jordan was one of the best trash-talkers the league has ever seen, so we figured we’d rank the top-10 moments of when MJ ran his mouth.

There have been some epic fan-player rivalries over the years—with Spike Lee and Reggie Miller being the best instance—but some poor Cleveland Cavs fan experienced what it was like to go toe-to-toe with Jordan during a game in the 1995 season.

To break it down, some bozo who scored a front row seat was heckling Jordan all game long, telling him to wear different shoes and all sorts of other shit because Michael only had six points in the first half. Ha, what a dumbass.

As the video shows, Jordan made it his priority to shut the guy up, as he went out and dropped 23 second half points, lead the Bulls to a win and pointed to the fan to be quiet once the Bulls star took a seat on the bench with the game’s outcome decided.

Not only was Jordan one of the most prolific scorers in NBA history, but the North Carolina Tarheel also had a penchant for playing lock-down defense, too. Trash talking was a huge part of how Michael cut into his opponents egos, and even at 52 years of age, he still brings it even if it’s a pick-up game…with 3x Super Bowl Champion Tom Brady.

There’s no hall passes ever given out when Michael’s on the court, no matter how many NFL MVP trophies you have.

Year: The span of their respective careers

Steve Smith and Michael Jordan used to jaw at each other regularly, and both guys seemed to get a kick out of the trash-talk. The kind of thing that elevated their game, so to say. Smith recalled one of his most memorable games against MJ on NBA Open Court a few years back when he couldn’t exactly figure out what Michael’s taunts meant…until it was too late.

“One time he started counting backwards. He said something like ‘38,’ and I didn’t get it. And he starts saying ’36.’ So, wait a minute, wait a minute…he’s going backwards? Now if he gets to zero, he got 40 (points).”

As a member of the young and upstart Charlotte Hornets, Kendall Gill and his teammates, Larry Johnson and Alonzo Mourning, started feeling themselves while playing MJ and the Bulls in a 1992 contest.

Me, Larry Johnson, and Alonzo Mourning were young upcoming guns in the league. We were feeling ourselves in this game because we were giving it to the Bulls. After this play our Wild oats quickly became shredded wheats!

Alonzo had just blocked 2 of the Bulls shots. We started talking smack. I could since MJ getting mad because We were matched up against each other. I didn’t give a crap though because I was young, dumb and didn’t know any better.

MJ back doored me out of the triangle offense and put Zo on his collection of posters. Lol. Moral of this story? Callin out the Devil is one thing. Facing him is another! Never tug on Superman’s cape unless you’re absolutely ready! Did you hear me Pacman?

Gill went so far as to call Jordan the fucking devil on the basketball court, so, yeah, MJ was out to corrupt souls if he felt the need to.

During Jerry Stackhouse’s rookie season with the Philadelphia 76ers, the fellow North Carolina product reportedly made a quote to the effect of, “I can beat Michael Jordan one-on-one.” Way to dig your own grave, buddy.

Jordan was guarded by Stackhouse for the majority of their first game against each other, and proceeded to drop a season-high 48 points on him, winking at the Sixers’ bench after nearly every bucket. The word “savage” wasn’t en vogue back then, but that’s exactly what MJ’s play was that night.

Recalling the incident later, Stackhouse, who MJ also held to just 4-11 from the field, told the Baltimore Sun:

“I heard on CNN that somebody said I made a quote that said I could beat [Jordan] one-on-one,” said Stackhouse, a North Carolina product who had played against Jordan in Chapel Hill. “It’s not that I didn’t say it, I’m not going to back down, either. I think I might’ve said I didn’t feel anybody could stop me one-on-one. Next thing I know, it’s Jordan, it’s Chicago.”

Early on in his career, the Bulls were on the road taking on an equally as young Dikembe Mutombo and the Denver Nuggets. With the game well in hand, Jordan was doing what he does best: running his mouth. As the clock was winding down, MJ was fouled and sent to the line with 5 seconds left. Mutombo proceeded to jaw at him a bit after he made his first free throw, then Michael turned the tables. Before his second shot, Jordan mouthed to Dikembe, “This one’s for you,” closed his eyes and drained the second shot in his face.

For all those overly confident rooks who come into the NBA with mad swag, let this be a reminder: Never mess with the big dog on the block.

Basketball Hall of Famer Reggie Miller found that out the hard way, when, in a 1987 preseason game, Miller started running his mouth to MJ after the first-year Pacer had outscored Jordan 10-to-4 in the first half.

That’s when shit got real, as Jordan finished the game with 44 points to Miller’s 10, and then reminded Reggie to, “You sure, be careful, you never talk to Black Jesus like that.”

Wait, Jordan referred to himself as Black Jesus? Reggie Miller told Jimmy Kimmel in an interview that he learned his lesson, never talking shit to Jordan ever again.

For someone who is fucking obsessed with Michael Jordan, specifically his Air Jordans, you would think that PGA golfer Keegan Bradley would know better to mess with His Airness.

It’s too bad the 2011 PGA Championship winner was unaware just how cold Jordan could be in his trash talk, though.

After MJ took over the Twitter account for his Charlotte Hornets in 2014 and tweeted out a picture of himself to prove the #MJTakeover, Bradley actually thought he could get the best of the hoops Hall of Famer by throwing serious shade, saying this:

.@hornets MJ how does it feel to get beat by me everyday at bears club?! #GoHornets

In a perfect reply, Jordan hit Bradley back in kind, simply saying this:

.@Keegan_Bradley Last time I looked, you were wearing MY shoes. You don't see me wearing Air Keegans…

And, with that, Keegan Bradley fully understood the wrath of Michael Jordan’s trash-talking game, waving the white flag with a surrender.

“@hornets: .@Keegan_Bradley Last time I looked, you were wearing MY shoes. You don't see me wearing Air Keegans…”

Game was definitely over, bro.

Jordan’s passion for golf is probably equal with his love of hooping. Being arguably the best NBA player of all-time, MJ has earned his fair share of rounds on the course with some quite prolific figures, including President Bill Clinton.

A notorious bettor, one time Jordan reportedly challenged No. 42 to break 100 on the golf course. When Clinton accepted his highness’ bet, Jordan then added “You’re going to play from the little girls’ tee?” throwing salt on Bill’s expectation that they were playing from the whites instead of the championship tee boxes.

For what it’s worth, yes, Bill Clinton did still break 100 and MJ probably lost a little bit of money that day.

Without a fucking doubt, this is the most ruthless example of Michael Jordan’s trash-talking ability, and it stuck with Muggsy Bogues for eternity.

With MJ’s Bulls leading Bogues’ Charlotte Hornets in a 1995 playoff game by one point, the pint-sized guard had the ball with the game on line and the world’s greatest player defending him.

Taunting Bogues mercilessly, Jordan backed off the 5’3″ Bogues to give him space to shoot and barked out, “shoot it you fucking midget.” Muggsy did just that, missed the shot and Chicago got the W.

Reports later came out that Bogues actually told a former Bulls assistant coach, Johnny Bach, that that single moment ruined the player’s career, as he was never the same after MJ savagely punked Muggsy out.

Maybe Jordan’s apology was casting Bogues in Space Jam in 1996, but that’s just my personal speculation.