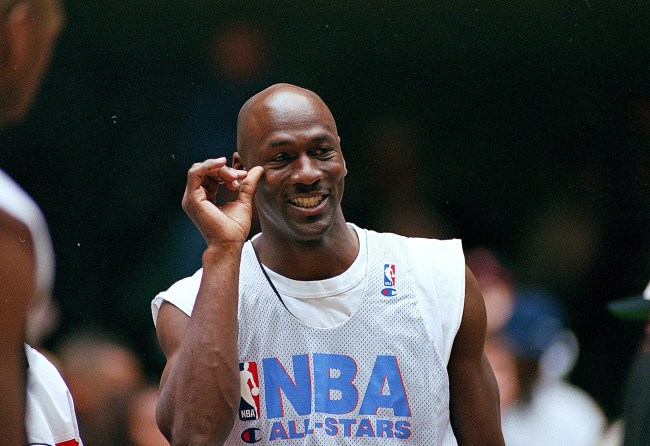 If there’s one thing The Last Dance reaffirmed about Michael Jordan, it’s that the six-time NBA champ and perceived GOAT loved any type of competition. Whether it was real or a figment of his own imagination, Jordan did whatever he could to get the best of people — as evident by that story about George Karl allegedly ignoring him before the 1996 NBA Finals, which led to MJ motivating himself to bury Karl’s team, the Seattle Sonics.

Never one to back down from a challenge, Michael Jordan is, was and always will be as intense as anyone, which is part of his legacy. But how deep did his level of competition go? So deep that, after retiring from the Chicago Bulls in 1998, MJ flew to the team’s practice facility that next season to whoop on a poor rookie named Corey Benjamin, who had the audacity to shit-talk Jordan over the phone.

According to Alex Kennedy of HoopsHype, Benjamin had enough of a belief in himself that he didn’t just challenge Jordan to a game of one-on-one, but he repeatedly told MJ that he could “get that,” which His Airness didn’t appreciate too much. Take a look at the details of the story below, as told by Corey Benjamin.

“Randy Brown, Ron Harper and Dickey Simpkins were Michael’s close friends. Those guys would always talk to Jordan on the phone and Jordan would always have stuff to say. I remember there was one particular moment when MJ said something to me and I told him, ‘I can get that.’ I was saying I could beat him one-on-one. We went back and forth, talking trash with each other for a month or two. Ron gassed it up a lot like, ‘He said he can get you, Mike! He thinks he can beat you!’ One day, Mike told Ron that he was going to come to our game [in Atlanta] and he told me, ‘I’m about to come see you.’ We’re at the game and they showed Mike walking into the game [on TV] and I knew right where he was headed. I’m in the training room with Ron and Randy, and MJ walks in there. He comes right over to me and says, ‘What did you say?!’ Remember, this is my childhood hero. I man up and I say, ‘I think I can get that.’ He told me, ‘I’ll be at your practice in a few days and we’ll see if you can get that.’”

“We fly back to Chicago and at our next practice, I’m looking over my shoulder but I’m also thinking, ‘Yeah right, he’s not going to fly to Chicago just to play me.’ After practice, I’m walking off the court when MJ walks into the gym. He said, ‘I’m about to give you your chance.’ As a basketball player, it was the best feeling in the world to play one-on-one against Michael Jordan in front of everybody. The score was 11-9, just to let you know. Everybody says it was 11-0 or 11-1 or 11-2. He did get up to 7-0 pretty fast and I was amazed; I had never seen anything like that in my life. But the final score was 11-9 and it was the best one-on-one game I’ve ever played. It was like a dream come true.”

Man, Michael Jordan really was like a predator stalking his prey, wasn’t he? Not only did he feel disrespected enough from some rookie named Corey Benjamin to go fly to a Bulls’ practice to play him one-on-one, but, as Benjamin tells it above, MJ even sought him out when he traveled to watch Chicago play the Atlanta Hawks that year, making it a point to talk crap to the rookie prior to the game. That’s just fucking ruthless of the GOAT.

As for Benjamin’s recollection of the game with MJ, well, it seems to be a little bit different than some of his former Bulls’ teammates. According to guys who witnessed the game — like Rusty LaRue and Kornel David — Jordan put a serious hurtin’ on the rookie, teaching him a real lesson; and trash-talking his way through the entire contest. Here’s what both David and LaRue told HoopsHype about how they remember the game.

Kornel David: “MJ showed up and he just schooled him. Corey was a high-flying athlete who could jump out of the gym; he had incredible athletic abilities. But it’s MJ! There’s a video of it on YouTube! You have to watch it. The next day, the Chicago Tribune ran a double-page [spread] showing all of MJ’s buckets. It was incredible. (laughs)”

Rusty LaRue: “I remember them playing one-on-one; of course, Mike put it on him. (laughs)”

Jordan trash-talked throughout the game.

“Look around you,” Jordan said at one point, looking at the six championship banners hanging in the gym. “What do you see all around you? You didn’t have anything to do with those!”

After scoring the winning basket, Jordan spanked Benjamin and yelled, “Sit down!” With a smile, Jordan added, “Don’t call me out of retirement again.”

Just to set the story straight on who’s telling the truth and who might be letting his pride stand in the way of said truth (*cough, cough*, Benjamin), the video below sort of supports David and LaRue’s claim that Michael Jordan demolished the rookie.

There will never be another Michael Jordan. Sure, it’s fun to have the GOAT debate and all that, but name another athlete who was this competitive, took things this personal and found so much joy in demeaning another human being on the basketball court. You can’t; and that’s why MJ is forever a legend.