New Poll Shows Just How Torn The U.S. Is On The Michael Jordan-LeBron James GOAT Debate 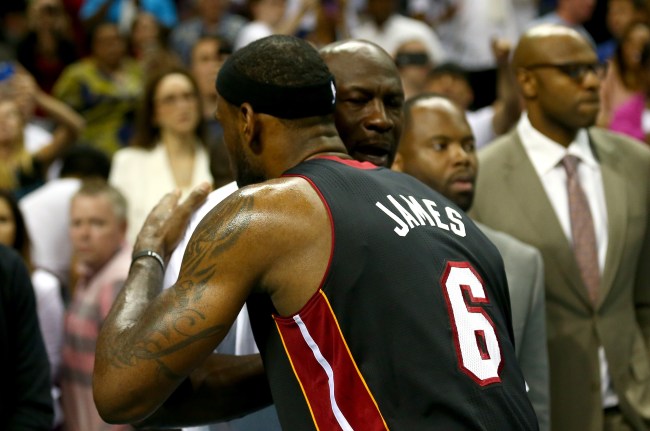 For as long as most of us can remember, Michael Jordan’s GOAT status has always been pretty much understood: With six NBA titles in six NBA Finals’ appearances — and a slew of other accolades — His Airness couldn’t be challenged. Hell, even a 2019 survey asked 1,082 sports fans about their thoughts on the topic, and the responses proved Jordan reigned supreme over anyone else in NBA history, as more than two-thirds of the respondents

But is MJ’s GOAT title really as safe as previous polls suggest? According to a new U.S. map, it sure as hell isn’t, because there’s a lot of people who claim LeBron James might hold the title.

The sports gambling site BETonline decided to take a stab at the Michael Jordan GOAT debate, putting the Basketball Hall of Famer against the one guy most people think can even dare challenge MJ; LeBron James. The results? With all 50 U.S. states taking part thanks to social media tracking, an astonishing close race ended with 26 states in favor of Jordan, and 24 states for James. Take a look at the results to see what each state thinks.

The fact that the MJ-LeBron GOAT debate is THIS close right now makes me miss the #NBA so much more. 😞 (via @betonline_ag) pic.twitter.com/bgFVWaRr1j

Using geotagged Twitter data on 100,000 tweets from the past week, BETonline was able to get the above results. Personally speaking, it’s more than shocking to see how damn close it really is between Jordan and James.

While it’s probably just as surprising to you to see the GOAT debate so close in the above map, it’s even more shocking when you compare the BETonline results with the aforementioned 2019 survey, which had fans undeniably admit that Michael Jordan’s GOAT status was very much safe and sound — and by a insanely wide margin, too, as James finished second on that list with just 10 percent of the vote.

What’s even more surprising than all of the data above is this: Michael Jordan has been in the news a helluva lot more lately than LeBron James has because of The Last Dance documentary airing on ESPN, meaning more people are getting a reminder of just how incredible he was. One would imagine this would boost him up in terms of popularity with people around the country, giving him a much bigger edge than he has in the BETonline poll.

There are a lot of things we may never get a definitive answer to — like if Apollo 11 actually landed on the moon in 1969, or if the current pandemic is something we should actually all be freaking out about or not — but one that sports fans will never, ever, in the history of mankind ever figure out is this: If Michael Jordan, LeBron James or somebody else is the GOAT. Both of those guys have staked their claim in various ways, so let the arguments continue until the end of time.