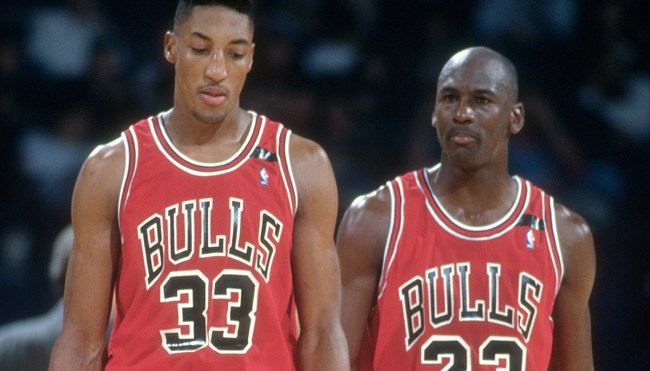 No one likes to be forced to play second fiddle to someone else, but when that person in question is arguably the most talented fiddler to ever fiddle and capable of elevating the fiddling skills of everyone around him as a result, it’s hard to hold too much of a grudge.

However, it doesn’t appear Scottie Pippen feels that same way, as the man who won six NBA titles with just a bit of help from Michael Jordan has spent the last couple of years doing everything in his power to tarnish the legacy of his longtime teammate while subsequently doing even more irreparable damage to his own.

Last year, I did a bit of a deep dive into his gradually escalating (and incredibly one-sided) feud with M.J. This beef can largely be traced back to Pippen’s perception of how he was portrayed in The Last Dance, as Jordan’s former right-hand man was perhaps the only person who was shocked that a vanity project produced under the watchful eye of a noted egomaniac was primarily concerned with painting its star in the best light.

Now, it would appear Pippen’s relationship with Jordan has reached a point where it’s no longer salvageable based on what Charles Oakley had to say during a recent conversation on The Bill Simmons Podcast.

During the chat, Oakley—who briefly played on the Bulls with both men before taking his talents to the Knicks—said the duo’s connection “wasn’t great from the get-go” and believes they’ll never talk again because of the impassable rift that formed as a result of Pippen’s vocal displeasure with how he was portrayed in the documentary series.

You have to imagine Pippen had to know this is how things were going to play out when he decided to fight the perceived pettiness with even more pettiness; after all, we’re talking about a guy who decided to go to war with an all-time legend who used his Hall of Fame speech to diss the high school basketball coach who didn’t put him on the varsity roster.

With that said, it’s still a bit of a shame.