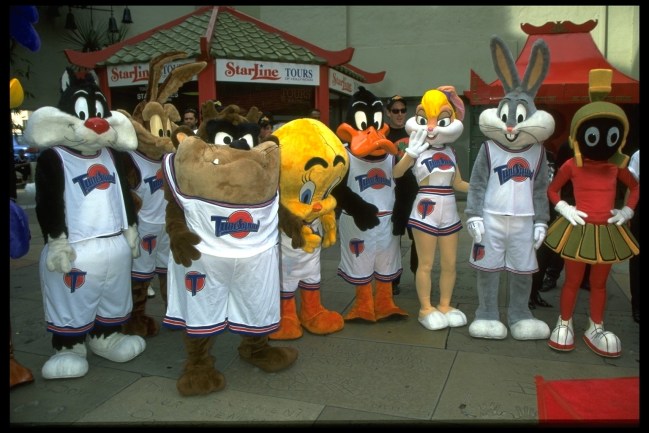 For any diehard Space Jam fans looking to recapture the magic of that movie from 23 years ago this season has something special in store for you. Michael Jordan‘s Steak House in Chicago will be serving up a ‘Mike’s Secret Stuff’ shake + burger special for $27 during Chicago Bulls home games this season from now through April 13.

We’re still over a year from the long-awaited Space Jam sequel starring LeBron James that’s set to hit theaters at some point in 2021 but that isn’t stopping MJ from juicing the Space Jam hype right now.

Michael Jordan Steak House is located at 505 N. Michigan Avenue and carries a 4.4 out of 5-star rating which is pretty solid for a steakhouse but not even close to perfection. It’s located within the InterContinental Chicago Magnificent Mile if you’re looking for it and get lost.

The combo, offered to customers at the bar, features a burger with barbecue braised pork belly, pickled onions, dill pickle, stout mustard, butterkäse, and aged cheddar. It comes with fries and a special salted-caramel milkshake, dubbed “Mike’s Secret Stuff,” for $27. The combo is available during every Bulls home game through April 13.

It’s being said that this ‘Mike’s Secret Stuff’ is a play on The McJordan Special that was available for a limited time at McDonald’s in the Chicago area, one that the Michael Jordan Steak House has periodically brought back to life with their own twist on it.

According to Eater, despite Michael Jordan being retired and pretty much gone from Chicago for years, his steakhouse and the movie still remain an important part of the city’s culture and the restaurant is still a hotspot after all this time:

MJ’s restaurant continues to be a tourist attraction off Michigan Avenue. The steakhouse still draws Jordan fans on game days, despite 21 years passing since the Bulls’s last championship. The restaurant still offers its Table 23 promotion, and started serving cocktails using tequila and mezcal from Cincoro, the company co-owned by Jordan and four other NBA owners. Jordan, who retired from playing in 2003, now owns the Charlotte Hornets.

“There are Jordan fans from the Bulls, then you have them from the shoes — there are people that are crazy, crazy about those — and then you have the Space Jam fans,” Cooper said. “You have a multitude of people who are MJ fans in different ways.”

Speaking of Jordan’s shoes. My buddy scored these Michael Jordan golf shoes this week and I could not be more jealous. Not only am I in dire need of some new golf shoes but those are sick and infinitely better than the beat-up pair of Adidas golf shoes I’ve been rocking for the past two or three years.

For more on this Space Jam combo special, you can click here to visit Eater.