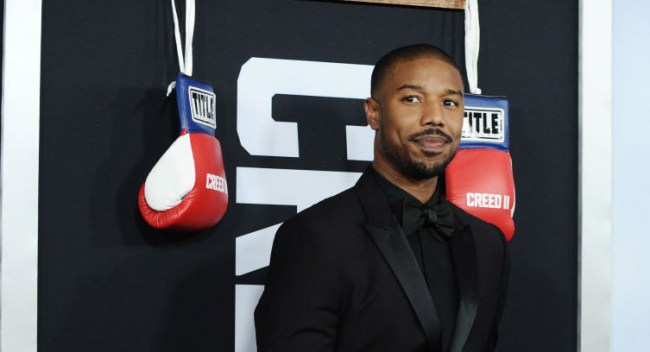 Michael B. Jordan has now had to train, hard, for two Creed films. And he’s looked pretty darn good doing it. So, wanting to put all the work to good use, he says he wants to fight multiple-time world champion Roy Jones, Jr. Seriously.

Of course word of what Jordan said got back to the 49-year-old Jones.

Jones, you may recall, started out his boxing career 34-0, then 49-1, was a world champion in four weight classes, and is still boxing professionally, having defeated Scott Sigmon by decision on Feb. 8 to move to 66-9 in his career.

“I know he can’t beat me still. I know he’s probably in better condition because he’s younger, he probably thinks he could go longer, probably thinks he might even bea ble to out-whoop me, but I’m an old school vet,” he continued with a chuckle.

Jones did add that he loves the fact that Jordan has the heart to to want to go in the ring with him, but if they were to fight there wouldn’t be any quick knockout, at least on Jones’ part. Because he says if he were to fight Jordan he would “take him into deep waters so he can understand what boxing really is.”

Don’t know about you, but I would definitely be interested in watching these two box. Jordan has to wear the red, white and blue trunks though.

If that’s what the fans want, y’all KNOW it’s not hard at all to make. Hard to get up early in the mornings, but sacrifice for the fans is a normality for me so just let me know. I’m not tripping either way. Delighted that he’s wanna be in with his top choice. Blessing to be that.