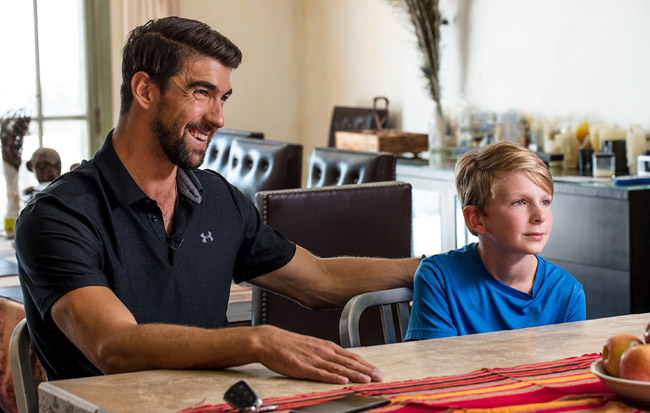 Monday, October 10th, is World Mental Health Day – a day for global mental health education, awareness and advocacy against social stigma for a health issue that affects thousands and is treatable.

On the surface, you wouldn’t think someone as accomplished and honored like Michael Phelps with almost two dozen Olympic gold medals would suffer from any mental health issues like anxiety and depression, would you? If so, you’d be wrong.

The 32-year-old Phelps appears in a new film called Angst and in it he reveals his battle with anxiety and depression – a battle which at one time caused the Olympic champion to have suicidal thoughts.

In the movie, Phelps is shown speaking to a youngster struggling with anxiety by sharing his own personal battle with the young boy.

“I just didn’t like who I was. If something was bothering me that would start to come up — and I would start feeling angry or depressed or upset — I would almost ignore it,” Phelps admits to the boy. “I would shove it even further down, so I wouldn’t have to deal with it, so I would never have to talk about it. I finally got to a point where it was my tipping point, where I just blew up. I couldn’t take it any longer.”

“I started talking about the things that I went through,” Phelps tells the boy. “And once I opened up about that and things I had kept inside of me for so many years, I then found that life was a lot easier. I got to the point where I understood that it’s okay to not be okay.”

The film, Angst: Raising Awareness Around Anxiety, produced by IndieFlix and its non-profit arm the IndieFlix Foundation, was created to start a global conversation and raise awareness around anxiety with an emphasis on youth and families, according to a press release.

“We felt it was important to make a movie that could raise awareness to open up the conversation and provide hope,” said producer and IndieFlix CEO, Scilla Andreen. “So many people struggle with anxiety and have trouble talking about it. We want to change that.”

Anxiety disorders are the most common mental health challenge in the U.S., impacting 54 percent of females and 46 percent of males, with age seven being the median age of onset, according to the World Health Organization. While anxiety disorders are highly treatable, only one-third of those suffering receive treatment. Everyone involved in the development of “Angst” has a personal experience with anxiety – from the producers to the interviewees.

“The conversation surrounding mental health really hits home for me. Many people don’t understand how debilitating mental illness truly can be, and even more than that, how common it is, yet people are afraid to have the serious discussions about it,” said Michael Phelps. “I welcomed the opportunity to be a part of ‘Angst’ to further the dialogue around mental health and to help people understand the impact anxiety has on our mental state and encourage people, especially kids, to ask for help.”

Dr. Jerry Bubrick, Senior Director of the Anxiety Disorders Center at the Child Mind Institute, explains why many do not seek treatment, however, “People see anxiety as a personal failing rather than a medical condition; they see it as something to be ashamed of, rather than something to be treated.”

In addition to the film, an exclusive virtual reality component also allows users to experience a panic attack first hand, hopefully further building awareness and empathy. It can be downloaded here.


If you or someone you know is considering suicide, please contact the National Suicide Prevention Lifeline at 1-800-273-TALK (8255). You are not alone.