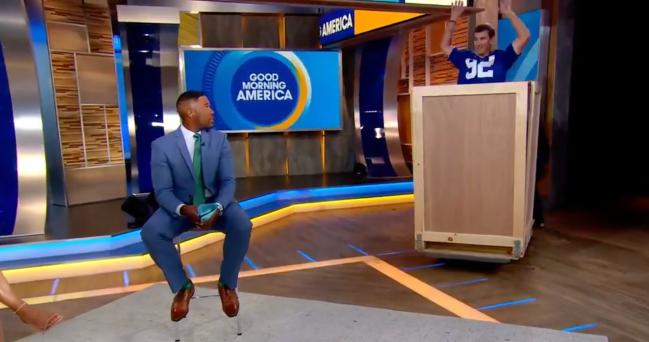 Michael Strahan was inducted into the Pro Football Hall of Fame in 2014, but somehow, his jersey number has not been retired by the New York Giants. That is about to change.

During Wednesday morning’s edition of ‘Good Morning America,’ on which Strahan is a anchor, a few of his former teammates showed up to break the news. The way in which they did it was fantastic.

Right in the middle of an Amy Robach segment, she was interrupted by a wooden crate that was rolled out onto the set. Suddenly, out of the prop popped Eli Manning, wearing a Strahan No. 92 jersey, and a lot of confetti.

Justin Tuck and Jessie Armstead were also in on the surprise and came out from backstage.

“You never invite us, so we had to sneak in,” joked Manning. Strahan had no idea!

WE HAVE A *GIANT* SURPRISE! We got @michaelstrahan good this morning with a HUGE surprise from his @Giants teammates Eli Manning, Jessie Armstead and Justin Tuck! pic.twitter.com/7qLiFgsAj3

Look at this surprise right here: 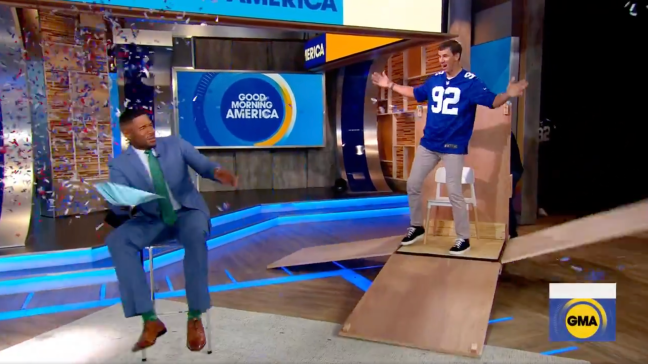 After the initial shock, Strahan had an inclination as to why they were there and he was right. Nobody on the New York Giants will ever wear the No. 92 again.

Strahan is having his number retired on November 28th when MetLife Stadium hosts the rivaled Philadelphia Eagles.

During his 15-year playing career, all with New York, Strahan was a four-time First-Team All-Pro, a seven-time Pro Bowler, a two-time NFL sacks leader, a defensive player of the year, and a Super Bowl champion. He also holds the official NFL single-season sack record with 22.5 in 2001.

Strahan is one of the best Giants in history and one of the greatest defensive linemen to ever play the game. More importantly, he is a stand-up guy.

I’m still in shock. This is a moment I will always remember.

To the @Giants organization and fans. Let’s get Metlife Stadium rocking on 11.28!

His jersey being retired was long overdue.