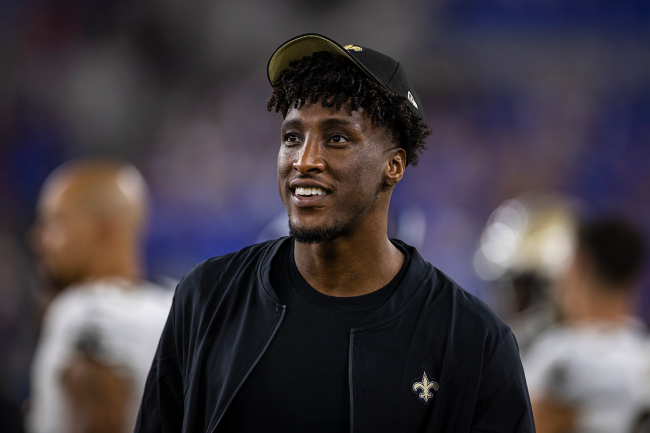 Michael Thomas has not played a down of football since January 3, 2021. The once-superstar wide receiver suffered a severe ankle injury at the end of Drew Brees’ final season and did not see the field at all during the 2021 calendar year.

Now, more than 17 months later, it looks like a return may be in the cards for 2022. Thomas recently posted a video of himself on Instagram and looks to be on his way to full health.

The former 2016 second round draft pick out of Ohio State was a monster in his first four years in the NFL. He was a two-time First-Team All-Pro, a three-time Pro Bowler, the 2019 Offensive Player of the Year, the NFL receptions leader in 2018 and 2019, and the NFL receiving yards leader in 2019.

Without Thomas on the field, the Saints have struggled. Not solely for that reason, but it’s much easier to get things going on offense when you have one of the best receivers in the game to throw to. Duh.

Should Thomas get back on the field this fall, he will have a new quarterback in Jameis Winston. The two could be a very dynamic duo if they are both at full health.

But that’s a big if. They are each coming off of significant ankle and knee injuries, respectfully.

In the video that Thomas posted on Tuesday, he is running a full sprint at a quick pace in New Orleans. He looks as big and strong as ever, but his speed lacks just a little bit.

Now, obviously it’s a short clip, but Saints fans and even some non-Saints fan immediately started clamoring about how Thomas will be the comeback player of the year in 2022.

That boy bout to be GOOOOOOD

However, some people aren’t as ready to buy all of the way in. Thomas is running in a straight line— can he cut on his ankle?

I want to see him run a hard route, stop on a dime on his bad ankle and then hard break out of it.

Then repeat that 10 times within 20 minutes.

Deltoid ligament repairs are no joke.

Really interested to see how he looks getting in and out his breaks though. I've always thought MT was the most violent route-runner in the game. If his ankle can withstand those strong cuts, it'll be a fun year.

Looks impressive when running straight. But this ligament is stressed when you do cutting activities or change directions quickly. That will be the real test for the repair and his ankle.