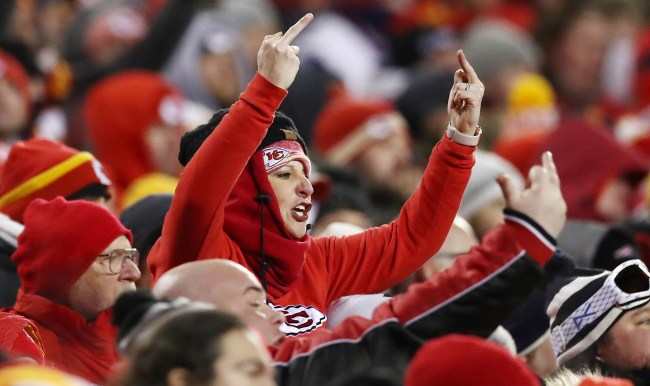 The success of the New England Patriots, 16 division titles in the last 18 years (the other two years they tied for first, but lost the tiebreaker), 14 total AFC Championship game appearances, 11 total Super Bowl appearances, five Super Bowl wins, is enough to drive any non-Patriots fan to the brink of insanity.

I can’t imagine being a fan of the Miami Dolphins, New York Jets, or Buffalo Bills. Especially someone who is 25-years-old or younger. The last two decades you’ve pretty much entered every single NFL season knowing your team had about a one percent chance of winning the division.

It’s almost enough to break a man. Which, apparently, it did to Michael Wilbon after the Patriots pulled off yet another nail-biting win in the AFC Championship against the Chiefs on Sunday.

I mean, just look at Wilbon’s slow descent into madness on his Twitter feed on Sunday…

The ruling is a fraud…there is zero chance the video was conclusive!

It's not a catch…why the long look?

So delicious that Edelman, smug as he can be, stands to be the goat of this game if….
(Big if though)

It looks as if an agenda is being carried out…

See what I mean?

Given some time to gather himself, Wilbon was still no less distressed during his appearance on ESPN’s Pardon The Interruption following the Patriots’ victory.

“More than one thing can be true. The Patriots are great and they got help. And it’s not the first time, they got lots of help (Sunday). And again, Tony, did the Patriots earn (Sunday’s) win? No, they didn’t,” an exasperated Wilbon told co-host Tony Kornheiser. “They’ve earned their place in NFL lore. Don’t tell me if you brush… that’s how hard Brady got hit… Bradygot hit that hard, and that’s a penalty?”

“That’s an embarrassment,” Wilbon continued. “The Patriots were gifted a victory, because they scored a touchdown on that possession in an overtime game.”

Wilbon then went to compare the AFC Championship to the infamous 2002 Lakers-Kings NBA playoff game, which was essentially revealed to be rigged.

“This was every bit as embarrassing as the Saints’ win because (the Patriots) didn’t earn it. You’re letting a great team off the hook. They didn’t earn anything,” said a clearly distraught Wilbon.

Poor Wilbon… someone really needs to go give the man a hug.