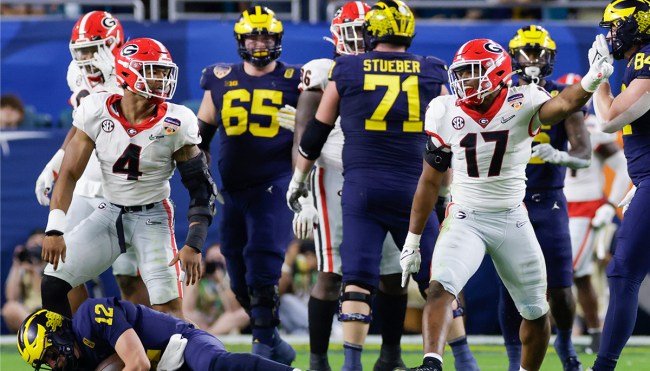 The Michigan football team came out to pregame warmups ahead of their College Football Playoff matchup with Georgia dressed in shirts with a motto that described what they were planning to do on offense that night. That motto quickly backfired as the Wolverines were trolled on what was an awful offensive showing against the Bulldogs.

Ok.. like The shirt the Michigan OL are wearing…. “Run the Damn Ball”….. pic.twitter.com/HZmg5lc1rQ

Michigan offensive lineman took to the field in t-shirts with the tagline “Run the Damn Ball.” But Jim Hargaugh’s group was unable to run, pass, or do much else in their 34-11 loss at the Orange Bowl.

The Wolverines didn’t score a touchdown until there were less than five minutes remaining, with the game being well out of reach by that point. As for that rushing attack? The Bulldogs held Michigan to just 91 yards and an average of 3.4 yards a carry.

Not ideal for a group that entered the matchup with enough confidence to boast these get-ups ahead of kickoff. Check them out below.

With the Wolverines doing very little in the run game, followers took to social media to pick fun at the pregame motto.

How’s this working out? https://t.co/nIRPJmVvaP

Obviously, Michigan wasn’t able to square up and “Run the Damn Ball” against the nation’s most talented defensive line unit. Georgia players took offense to the quip and let it show with their play on the field with one of their most dominant performances.

Lol. You’re not squaring up with Northwestern tonight. Welcome to the big leagues https://t.co/eJLqGiOce5

Lmao this offensive line showed up in run the damn ball shirts and get blown up when they are pulling 😭😭😭 pic.twitter.com/SVdxvmVcuR

Michigan wasn’t quite ready for the test that Georgia would provide. Next time, they may rethink pulling a move like this prior to game time in hopes of not being the butt of jokes around the college football world.