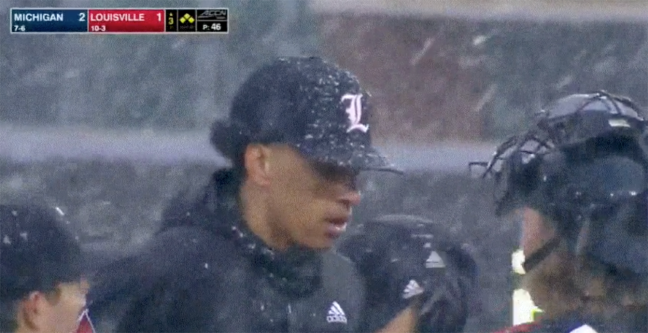 Baseball is not meant to be played in the snow, but that is exactly what happened on Friday. Louisville baseball hosted Michigan during what quickly became a literal blizzard and the scenes are outrageous.

On Friday afternoon, an unexpected mid-March snowstorm rolled through much of the Southeast headed toward the Northeast. Quite a few college programs were affected by the weather, but with this being the last weekend of non-conference play for most schools, it was important to try to get the games in.

As a result, knowing that the snow may cause Saturday’s game to be cancelled, the Cardinals and Wolverines played a double-header on Friday. However, it quickly became a one-and-a-half-header.

When the first game began, it was a gorgeous, sunny day in Kentucky and fans in the stands were comfortable in short sleeves.

As the day went on, that changed very quickly.

The temperature dropped and jackets were very necessary by the start of Game 2.

T1 | Elliott with a great job of hitting to lead off and we're getting going for Game 2 #GoBlue pic.twitter.com/jEn8xuYOlT

By the second inning, the snow had begun. It came quickly, but it was manageable.

E2 | Louisville scores an unearned run but O'Halloran gets 2 more Ks and now has 5 through2 innings #GoBlue 2 – Louisville 1 pic.twitter.com/c8IJT7H1AW

And then it became very heavy.

And then it became very, very heavy by the 4th inning.

It became hard to see anything, but they played on.

T4 | You'll have to trust us here, but Clark Elliott just hit a laser through an infield shift. #GoBlue 12 – Louisville 2 pic.twitter.com/vjYoLl1gGN

Eventually, the catcher couldn’t even see the pitcher throw the ball to the plate.

I mean… Someone has to stop this game. @NCAABaseball pic.twitter.com/oujvAmo6QG

At that point, the snow became too much and the game was suspended.

E4 | Louisville plates 2 runs as a 2-out flyball gets lost in the ….lights/ snow/ wind/ frozen eyelids.

Joe Stewart then ends the inning on a miraculous catch of an otherwise routine flyball and this game will be suspended. #GoBlue 13 – Louisville 4 pic.twitter.com/k2tqQj89w6

Louisville and Michigan will pick up in the top of the 5th inning on Sunday morning, because playing on Saturday was simply not an option. Wild stuff.