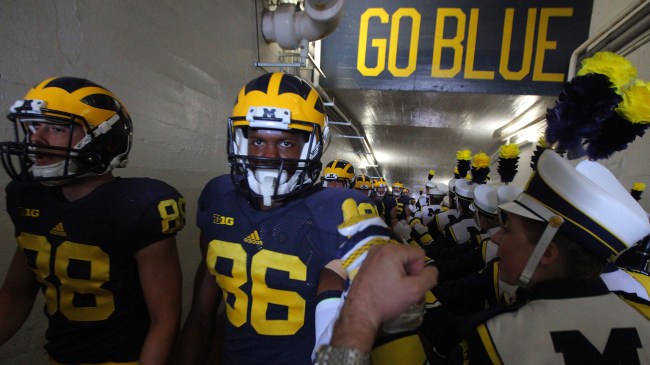 You don’t need to be a diehard college football fan to know there’s a bit of bad blood between the programs representing Michigan and Michigan State.

That reality was highlighted when the two schools faced off at The Big House last year in a game where the Wolverines were hoping to bring the Paul Bunyan Trophy back to Ann Arbor after two consecutive losses in the rivalry game that stretches back to 1898.

The home team ultimately walked away with a 29-7 victory over the Spartans, but the game was overshadowed by an ugly incident that occurred when players from both teams were involved in the wild brawl that unfolded in the tunnel leading to the locker rooms after the end of the contest.

Footage of the scuffling pic.twitter.com/cipLWi5RBS

The Big Ten conducted an investigation that led to Michigan State being slapped with a $100,00 fine (Michigan also received a “public reprimand”),  and prosecutors in Washtenaw County ultimately decided to hit seven members of the visiting squad with criminal charges for their role in the melee.

That incident also shined a harsh spotlight on a fairly glaring design flaw at Michigan’s stadium (the subject of the reprimand in question), as it wouldn’t have been possible for things to unfold in the manner in which they did if the nearly century-old venue had multiple tunnels reserved for both teams as opposed to a single one they share.

Now, it appears The Big House is about to get a little bit smaller based on the contingency plan Michigan has opted to pursue.

According to Scott Bell, a small group of season ticket holders in Section 1 received an email from university president Warde Manuel outlining some minor renovations that will result in an unspecified number of seats near the tunnel being removed to widen the space in an effort to minimize the chances a similar incident will unfold in the future.

An excerpt of what Warde Manuel sent to ticket holders in the affected area:

"This is being done to widen access to the field for competitors, staff and game personnel entering and exiting from the tunnel and is a direct result of a thorough safety review following the season."

I guess we’ll just have to wait and see if it has the desired effect.