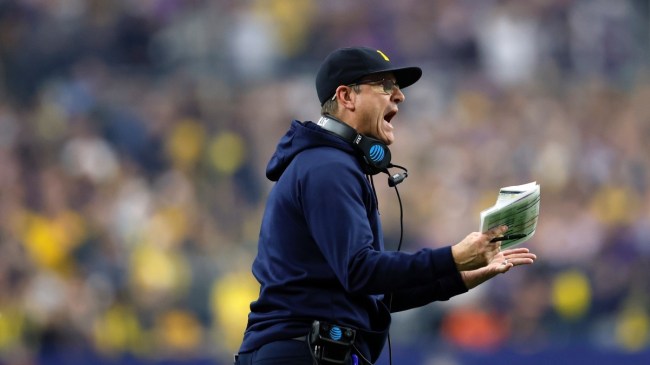 It was a banner year for the Michigan Wolverines this year. The team started 13-0 en route to a Big Ten Title and a college football playoff appearance.

It ended in terrible fashion, with an embarrassing loss to a TCU team that got mauled by Georgia in the national championship game. But, still, Michigan is certainly moving the right direction under Jim Harbaugh.

Speaking of Harbaugh, he’s returning to Michigan for next year after rumors of going to the NFL.

Jim Harbaugh will stay at Michigan.https://t.co/FaX0oQUolE

But, he’s got a huge headache on his hands. On Tuesday, news broke that the office and residence of quarterbacks coach and co-offensive coordinator Matt Weiss had been searched by police.

Here is some more details, courtesy of Mlive.com.

Weiss, 39, is believed to be the subject of an investigation into “computer access crimes” committed in December. A search of the building and his Ann Arbor home took place last week, reports say, days after Michigan’s season came to an end in the College Football Playoff.

“Matt Weiss is on leave,” team spokesman Dave Ablauf confirmed Tuesday night. Weiss has not been present inside the building for days now, and his suspension includes being taken off the road from recruiting.

An item from Jan. 5, 2023, is the only known incident involving U-M police at Schembechler Hall, 1200 S. State Street, where “an employee reported fraudulent activity involving someone accessing university email accounts without authorization. It was found that a crime may have been committed.”

On Jan. 5, Univ. of Michigan police took a report of fraudulent activity “involving someone accessing university email accounts without authorization,” according to public records. pic.twitter.com/dkHu01nmki

Quite the pickle Michigan has gotten in here.