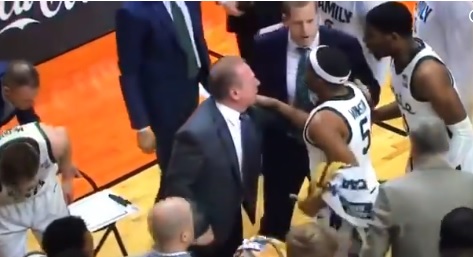 After the Spartans went on a 9-0 run early in the second half to take control of the game Izzo got in Aaron Henry’s face and started chewing him out. Things escalated to the point where Cassius Winston had to step in an separate Izzo from Henry.

Tom Izzo was screaming at Aaron Henry. Cassius Winston physically holding Izzo back as he yelled.

Tom Izzo going apesh*t on one of his players for presumably going under the ball screen, despite his team playing well and taking control with this steal and layup. 🤦‍♀️ pic.twitter.com/BbLBDFHiw8

Tom Izzo loses it on his freshman Henry 👀 pic.twitter.com/j25dSjT9Ra

Twitter was not feeling Izzo’s angry on-court display directed at one of his young players.

Good thing Cassius Winston was there

Jesus Christ. Tom Izzo is an insufferable asshole. You see what he's doing to his own player on TV right now. Why would anybody play for him, EVER?

Tom Izzo Optics.
You watch, every talking head will give him a pass here.

People bitch about Mick Cronin's on-court demeanor but Michigan State just went on a run to take a 5-point lead and Tom Izzo is tearing into one of his players while being held back by another staff member.

Tom Izzo's an asshole. Not sorry for saying it. I have no clue why he was yelling at Henry, but you're his coach, and you're so angry at a kid that you shove your finger in his face and lunge at him? Your other players have to hold you back… from your own player? Fuck off.

Definitely not a good look for Izzo.