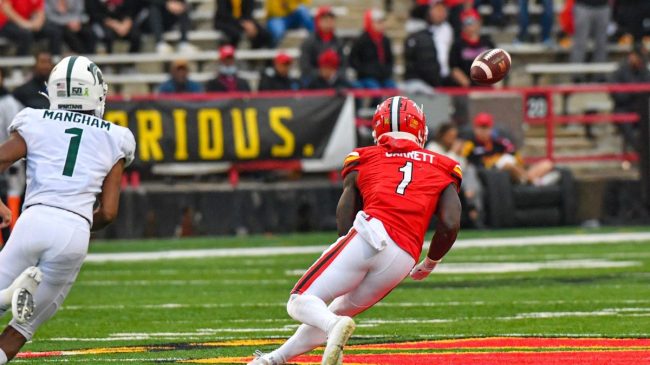 College football Saturdays are always special. Fans settle in for 12 hours straight of incredible plays, wild upsets, and hilarious boneheaded errors. But one thing that’s often overlooked is the danger of the sport.

We, unfortunately, saw just how dangerous things can be a week ago when LSU defensive back Sevyn Banks had to be carted off the field on a backboard. Thankfully, Banks was released from the hospital shortly thereafter. He was diagnosed with a spinal cord bruise and won’t return for at least five-to-six weeks.

The ugly side of the sport reared its head again on Saturday. The Michigan State Spartans faced a tall task when they welcomed third-ranked Ohio State to East Lansing.

Not only did the Spartans fall behind early in the contest, but they also lost freshman safety after a scary, scary incident late in the first quarter.

Prayers up for Michigan State DB Jaden Mangham. He's down and the cart is out for him after a nasty collision. pic.twitter.com/KKsh0ck8OS

Mangham was carted off the field after a heavy collision with Ohio State running back Treveyon Henderson that left him lying on the turf. He was thankfully conscious while being carted off and gave the crowd a thumbs-up while leaving the field.

But fans across the country immediately sent him prayers and well wishes.

Man, I hope Jaden Mangham is okay, and then gets plenty of excellent care with his long-term interest in mind as soon as possible.

I hope Jaden Mangham is ok. That looked like a hit to the head.

Prayers up for @JadenMangham 🙏🏾 #onelove

Both Henderson and Ohio State coach Ryan Day came to check on Mangham before he left the field. ESPN’s Holly Rowe then reported that he was taken to a local hospital for evaluation of a head/neck injury.

Holly Rowe reports Jaden Mangham is being taken to Sparrow Hospital and says it's a head/neck injury.

The Buckeyes and Spartans eventually got restarted following about a 20-minute stoppage. Ohio State currently holds a 21-7 lead midway through the second quarter.