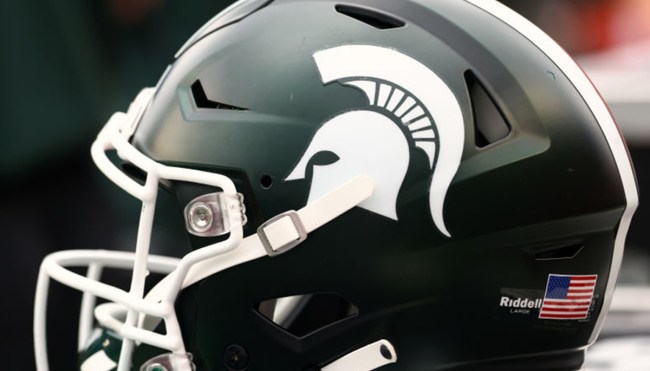 The rivalry between the football programs at Michigan and Michigan State is a fairly one-sided one in at least a couple of senses: the Wolverines currently boast a 71–38–5 edge in a series that stretches back to 1896, and while the Spartans may view them as their biggest foe, its safe to say folks in Ann Arbor are a bit more concerned with how they fare against the team at a certain University in THE State of Ohio.

With that said, Michigan State has been a pretty sizeable thorn in the side of a Michigan team that’s dropped 10 of the last 14 battles for the Paul Bunyan trophy (none of which were more memorable than the one that will be forever immortalized as the “WHOA HE HAS TROUBLE WITH THE SNAP” Game). That included this year’s showdown, as the eighth-ranked Spartans were able to secure a mini upset by beating the sixth-ranked Wolverines by a score of 37-33.

Michigan was able to bounce back from the loss on its way to earning a spot in the College Football Playoff for the first time, and the Spartans (who had their perfect season snapped by Purdue in a massive upset the following week) would ultimately earn a spot in the Peach Bowl and finished the season at No. 9 after beating Pitt.

That victory was the program’s first marquee bowl win since their triumph in the 2014 Rose Bowl, and on Thursday, the school revealed the players who made it possible will get a nice little keepsake in the form of the rings that will be handed out.

Come get yours 💍💍 #GoGreen pic.twitter.com/H5Wg57VrnI

Earned, not given 💍#GoGreen pic.twitter.com/Nq7oClGSXq

The Spartans couldn’t resist the urge to do a little bit of trolling when designing the rings, as the team used one side of the hardware to commemorate the victory over the Wolverines in a move that has infuriated plenty of Michigan supporters.