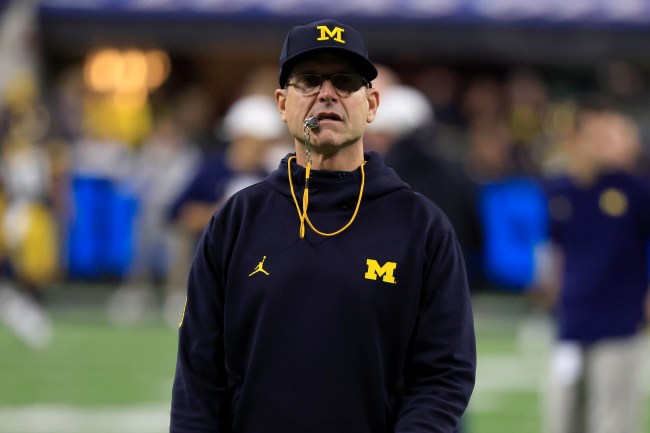 The idea that Jim Harbaugh could leave Michigan for an NFL job was one of the more unexpected reports to come from the NFL’s head coaching searches. Now, the potential for him to leave Michigan has led to another unexpected twist.

Insider Jason La Canfora reported on CBS Sports today that if Jim Harbaugh leaves Michigan, his job could be taken by an employed NFL head coach. According to the report, Carolina Panthers head coach Matt Rhule could be the man to take over in Michigan.

The report even states that this wasn’t the only college job that Rhule would have been interested in.

Rhule was keeping a close eye on the Penn State situation, sources said, where James Franklin ultimately landed a big extension, and may have pursued the LSU opening as well had they been more interested in him. With Rhule facing a pivotal third year in Carolina, with an expectation for much better results, a big-time college job opening up would draw attention.

If Michigan landed Matt Rhule, it would be the second consecutive head coach they’ve managed to steal from the NFL ranks. It would, however be a surprising move for Rhule.

It would not have come as much of a shock if Matt Rhule wasn’t the Panthers’ head coach next season. the expectation was just that it would have been because they fired him.

Rhule was brought to Carolina after resurrecting a Baylor football program that had been mired in scandal. Unfortunately, he has not had such a positive impact on the Panthers. They have won just five games in each of his first two seasons. It would be surprising to see him keep the job if that happened for a third season.

Maybe Rhule thinks he has a better chance of remaining employed with Michigan than he does with the Panthers. Maybe he knows the offense might actually get worse with Ben McAdoo as the offensive coordinator.