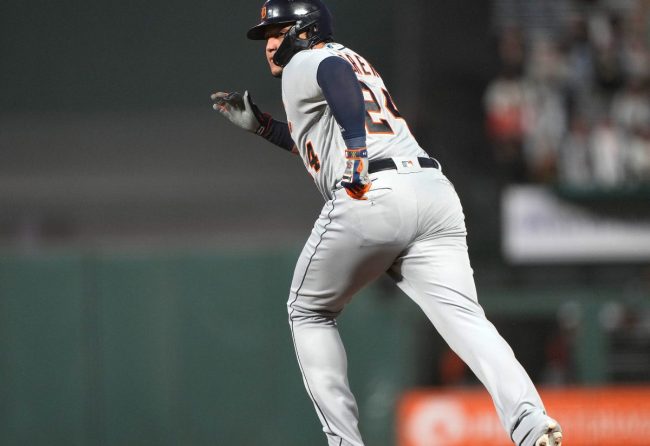 Miguel Cabrera has joined elite company with his latest milestone achievement. It’s his greatest accomplishment yet, which is quite impressive considering he’s already in both the 500-HR club and the 3,000-hit club.

On Tuesday night, Cabrera stole the 40th base of his storied career. He’s now 40 out of 61 in successful swipes, and a perfect 1-for-1 this year.

The slugger is obviously known for his bat. Miggy is a career .310 hitter throughout his time in the bigs, which has spanned two decades in both Detroit and Florida. As a youngster, he helped the Marlins win a World Series championship. The budding star then blossomed, reeling off 11 All-Star appearances over the next 13 seasons.

He’s won baseball’s Triple Crown, been a batting champ, and led the league in home runs. He has 12 100-RBI seasons and 10 30-HR campaigns.

But running the bases has never been a strong suit.

Miggy lacks the top end speed to steal bases on a consistent basis. He’s never recorded a double-digit steal season, topping out at nine in 2006. Over the last decade, he’s notched just seven stolen bags, but his persistence has finally paid off.

On Tuesday, Cabrera swiped third against the Royals, which led to an all-time reaction on social media. Fans were giving him new nicknames, posting hilarious jokes, and even suggesting that the Tigers put his new milestone on the stadium walls.

Others soon joined in on the fun.

Rickey Henderson’s record is NOT safe!

Nobody’s record is safe while Miggy is playing. He’s coming for you, Rickey! 🤣 pic.twitter.com/Gp69QgkHID

There is absolutely no denying the wheels.

Miggy now ranks in the top 10% of MLB base stealers all-time.

What an awesome accomplishment.