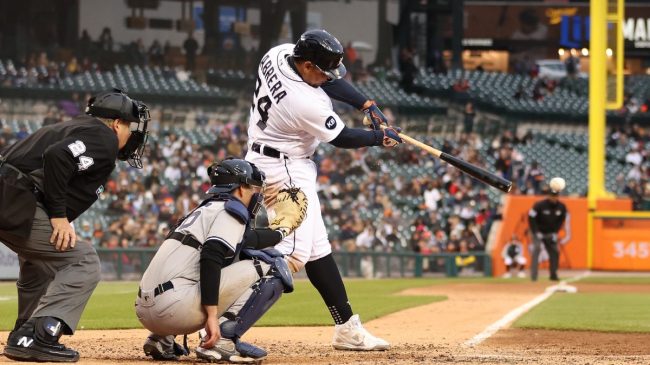 Miguel Cabrera is closing in on history.

The veteran slugger is just one hit shy of becoming the 33rd player in MLB history to record 3,000 hits. He’d also become just the seventh player to ever notch 3,000 hits AND 500 or more home runs.

Cabrera entered a Thursday afternoon matchup with the Yankees with a chance to join that elite club, but he was denied an opportunity in his final at-bat.

With New York trailing 1-0 in the eighth inning of the game, Cabrera stepped up to the dish with runners on second and third. Rather than take their chances with the designated hitter, the Yankees pitching staff opted to intentionally walk him.

The move robbed Cabrera of a chance to make history, as he was 0-for-3 on the day before making that late plate appearance.

Tigers fans were expectedly unhappy, and they rained boos down on the players in pinstripes to let them hear their anger. Take a listen.

You can hear “Yankees suck” chants coming from the bleachers as viewers were unhappy with their stolen opportunity to witness history.

In fitting fashion, the move backfired. Next man up Austin Meadows laced a double to center field the following at-bat, plating a pair of Tiger baserunners. Detroit would go on to win the game by a score of 3-0.

The MLB world was not happy with the Yankees’ decision, and they took to social media to let it be known. Check out the Twitter reaction below.

Miguel Cabrera is a hit away from 3000 and the Yankees intentionally walked him.

What has happened to a once proud franchise @short_porch pic.twitter.com/KiBf8xXRGf

Miguel Cabrera is just one hit away from 3,000 and the Yankees intentionally walked him.

Fans were not happy 😬

He will remain at 2,999 hits for nowpic.twitter.com/AO73zz0nka

The Yankees intentionally walked Miguel Cabrera & everyone hates them even more nowpic.twitter.com/4XGApZvO9c

Cabrera will look to notch that 3,000th hit on Friday in a matchup versus the Rockies.