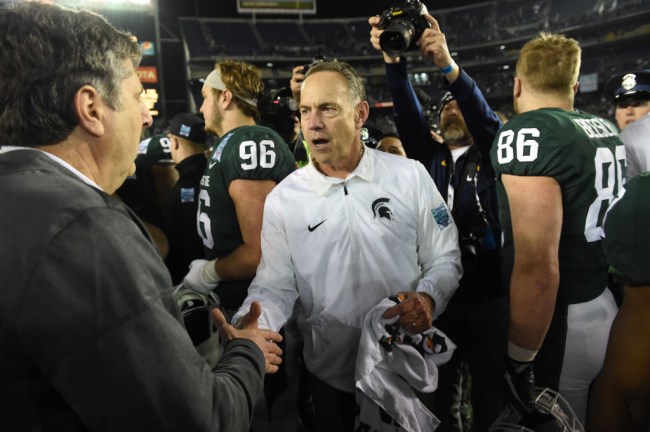 Mark Dantonio has stepped down as Michigan State head football coach after 13 seasons in charge. The soon to be 64-year-old is the all-time winningest coach in school history, won three Big Ten titles and punched a ticket into the College Football Playoff back in 2015 during his time in East Lansing.

In the statement posted on Twitter, Dantonio said his plan is to stay within the MSU athletic department “in a role involving special projects, especially transitioning our players, both current and incoming, to their next challenges.”

The news is a bit surprising, but what’s really interesting here is the timing of the entire thing. National Signing Day is Wednesday, so losing a head coach just hours before players make their decisions on whether or not to sign with the Spartans isn’t necessarily an ideal situation.

As of Tuesday afternoon, the Spartans’ 2020 signing class ranks 42nd in the country, per 247 Sports. As our own Mr. Anderson was quick to point out on Twitter, Dantonio has never been an elite recruiter, but has certainly gotten the most out of his players over the years.

I guess that was a testament to his player development?

Nevertheless, it’s safe to say that this move won’t necessarily help with recruiting.

According to Detroit Free Press, the frontrunner to replace Dantonio is Luke Fickell, according to sources with knowledge of the athletic department’s thinking. No deal is in place, the sources told the paper.

Fickell is currently the head coach at Cincinnati where he’s led the Bearcats to a 26-13 record over the last three seasons.

The timing wasn’t too bad for Dantonio, however, because since he remained the team’s head coach past Jan. 15, 2020 he picked up a rather sizeable check. How sizeable? Just over 4 million, no big deal.