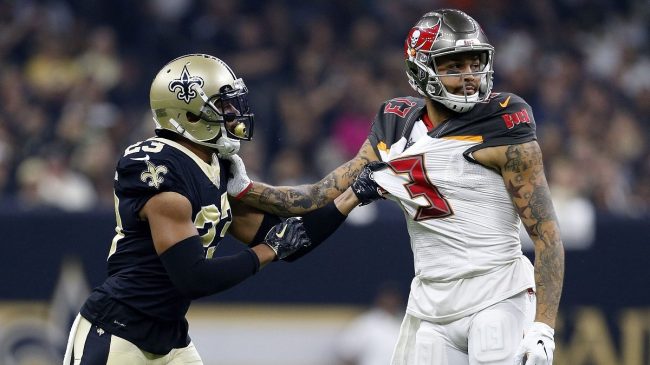 It’s been an absolute scrum between the Tampa Bay Buccaneers and New Orleans Saints. Neither team is finding success on offense and it’s been a frustrating day for everyone. However, tempers flared early in the fourth quarter as Mike Evans and Marshon Lattimore got in a fight and fans are going bonkers about it.

Things got out of hand early in the fourth quarter after the Saints stopped the Buccaneers once again. Tom Brady had some choice words for Lattimore then Mike Evans came out of nowhere and escalated things rather quickly. In the end, both were removed from the game.

Lattimore and Evans both are ejected from the game.

Marshon Lattimore has had Evans’ number the last three seasons and it looks like the Buccaneers wide receiver is completely over it. You can see the Saints cornerback jawing back and forth with Brady, then Mike Evans bull rushes him to the ground.

Eventually cooler heads prevailed, but it took a minute for the referees to calm down the situation. The NFL doesn’t put up with fights like these, so additional punishments are expected for Mike Evans, Marshon Lattimore, and potentially others.

As we mentioned before, Lattimore has had Evans’ number recently. The Buccaneers receiver finally let his frustration out in the worst way possible.

We’re sensing a common theme with these takes.

Mike Evans is mad that Marshon Lattimore owns him

We’ve seen teammates protect their quarterback before, but this was a bit over the top.

Don’t mess with his QB

That it is, Nathan. That it is.

Mike Evans and Marshon Lattimore may never like each other. At the very least, this builds up some hype for when the Buccaneers and Saints face off again later in the season.