Mike Golic Jr. Just Devoured An Oreo Dipped In Mayonnaise With No Regard For Human Life (Video) 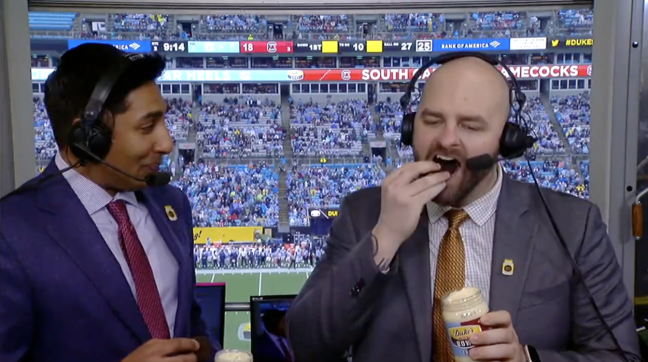 The hype surrounding the second-annual Duke’s Mayo Bowl was immense. After promises of a celebratory Mayonnaise bath, everybody and their mother was talking about the game between North and South Carolina.

As a result of the conversation, Mayonnaise was trending on Twitter as it took place in Charlotte. Having a totally normal one.

Mike Golic Jr. and Anish Shroff (both legends in their own right) were on the call for ESPN and it led to one of the wildest moments in broadcast history.

During the first half, the camera cut to the two analysts in the booth. Golic had prepared a few unconventional foods that worked well with mayonnaise.

What makes Duke’s mayonnaise different from other types of mayonnaise is what it calls a hint of “twang.”

Duke’s is made with a higher ratio of egg yolks than most other commercial mayos, which makes it rich, creamy, and less likely to separate when heated. There’s also a wisp of tang from vinegar and a touch of paprika. Its texture is thicker and almost custard-like instead of simply slick or gelatinous.

Regardless of how it is made or what makes it different, Golic dove right in with no regard for human life.

His first unconventional food of choice was a “cream-filled cookie.” ESPN probably couldn’t plug Oreos on-air, so that was the description.

In turn, Golic and Shroff dunked their cookies in the mayonnaise and took a big ole bite. Golic, though his initial face may have said otherwise, said he loved it. Shroff hated it.

The second food of choice was a peanut butter and jelly.

Shroff went first and actually enjoyed it, at least to some extent. As did Golic. As did sideline reported Taylor McGregor.

Not everyone agreed with their statements, however.

this is mayonnaise propaganda at its finest pic.twitter.com/RrxGbZvA9h

To round things out, the crew tried a mayo-dipped donut. Put it on record that Golic ate the entire donut.