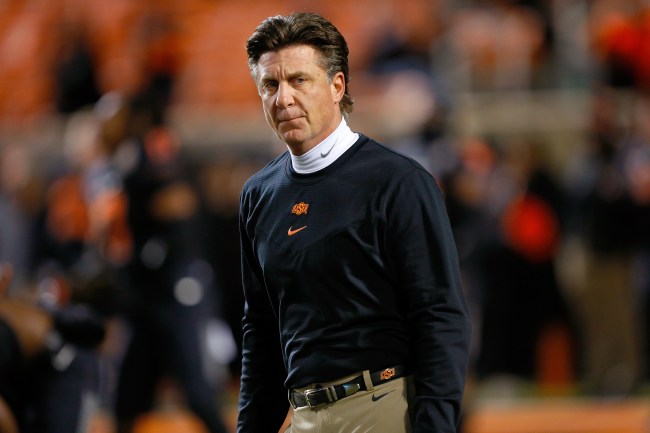 One of college football’s biggest rivalries could be coming to an end soon. At least, that’s the case if Oklahoma State head football coach, Mike Gundy, is right about the factors now in play to keep Oklahoma State-Oklahoma alive once Oklahoma leaves the Big 12 for the SEC.

In an interview with the Tulsa World, Gundy gave a clear picture of the obstacles this rivalry will be facing with Oklahoma changing conferences.

“If you’re going to go back into this game, you would be willing to play 11 (Power 5 teams) out of a 12-game season, which would be extremely difficult,” he said. “And from a business standpoint, we all know this: the more success in games you win in football is a huge revenue avenue for your athletic department and your university. Because the more you win in football, enrollment goes up. That’s a fact. Marketing money goes up. There’s a huge amount of money involved in that.”

This is just Mike Gundy’s opinion, but he does make a very important point here. While this matchup is currently a key in-conference game for both of these teams year after year, it represents a massive risk to both sides if they were to continue it as a non-conference clash.

Many teams in the power 5 use the first couple of weeks to either play tune-up games or to take on top-ranked opponents at neutral sites. Trying to stick an in-state rivalry in there somewhere either eliminates one of those easier matchups that pads the record or it could eliminate a big resume builder. Neither of those options sounds particularly appealing.

Gundy also sites the issue of how far in advance college football schedules are made. Oklahoma State already has 2 non-conference opponents lined up until 2029, which leaves them with only 1 slot avaialable for the first 6 years that Oklahoma is set to be in the SEC.

Losing a rivalry that is about to enjoy its 116th edition this weekend would be a really disappointing consequence of conference realignment, but if Mike Gundy is right, it might be something college football fans need to get used to as more and more teams move to new conferences.