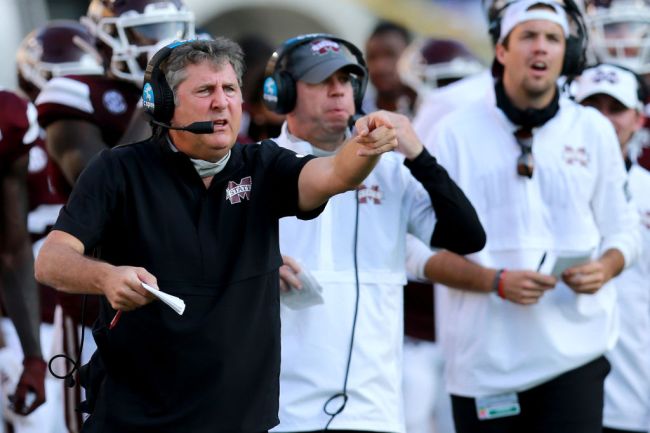 Mike Leach and Mississippi State pulled off the first major upset of the 2020 college football season after going to Baton Rouge and knocking off LSU 44-34. For Leach, it doesn’t get much better than beating the defending national champs on the road in your first game as head coach and his new-look Bulldogs certainly sent a message to the rest of the SEC on Saturday.

As the dust settles and the Bulldogs find themselves ranked 14th in the latest Coache’s Poll, Mississippi State wanted to make sure any college football fans out there looking for a bandwagon to hop on that their’s has plenty of room. The school cut a promo with Leach sitting on an actual wagon telling everyone to hop on the bandwagon.

There’s something about Leach sitting on an old-time wagon holding a cowbell telling people to jump on the Mississippi State bandwagon that is almost too perfect.

This isn’t your typical Mississippi State team. Leach brought his air-raid attack to Starkville and a has a quarterback in K.J. Costello that looked more than capable of putting up big-time numbers against any defense. LSU was without Derek Stingley on Saturday, arguably the team’s best defender, but even with him on the field, the Tigers were in for a handful with Costello who threw for 623 yards and five touchdowns.

Mississippi State hosts Arkansas this upcoming Saturday and it’s a safe bet that the team’s bandwagon will be a bit more full come kickoff.