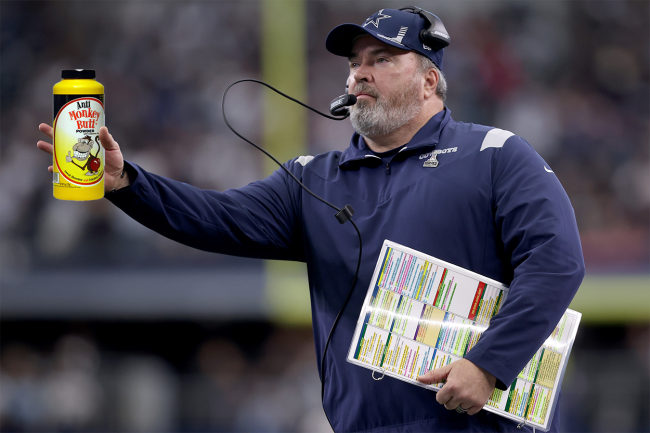 After suffering an ugly Week 9 loss to Denver, Dallas head coach Mike McCarthy needed something to get his players back focused and motivated. To do so, he provided each of his players with an anti-chafing powder called [Anti] Monkey Butt.

Per NFL Network’s Tom Pelissero, McCarthy used it as a tactic to give his team a kick in the rear. Ahead of Week 10’s matchup against Atlanta, he donned the week “R.A.W. week,” meaning “Red-Ass Week.”

The term referred to when someone chafes between the cheeks and gets some discomfort between them. It typically makes said person very angry.

That’s exactly what McCarthy was trying to convey.

“In other words [it means] get mad,” he explained. “Take it personally, and then get on the field and take it out on the Falcons.”

To reinforce the message, he had Cowboys staff hand out bottles of the Monkey Butt powder to players around the locker room.

“It’s a powder,” McCarthy said on Monday. “We made a point. It looked good on a PowerPoint. If you’ve ever seen a can of Monkey Butt, you get it. It’s expressive in the cure. I highly recommend it, if anybody has never used it. I don’t want to get into my personnel hygiene here, but ‘RAW,’ Red Ass Week, was the topic. We made an emphasis based on correcting what went on last week. I thought our players did a great job with it. Just had some fun with it. Another way to focus.”

Whether it was because of the Monkey Butt or not, Dallas responded. The Cowboys put a 43-3 beatdown on the Falcons and moved to 7-2 on the season.