Mike McDaniel Gets Choked Up Talking About Tua Tagovailoa Being Carted Off, Again Defends Decision To Play Him 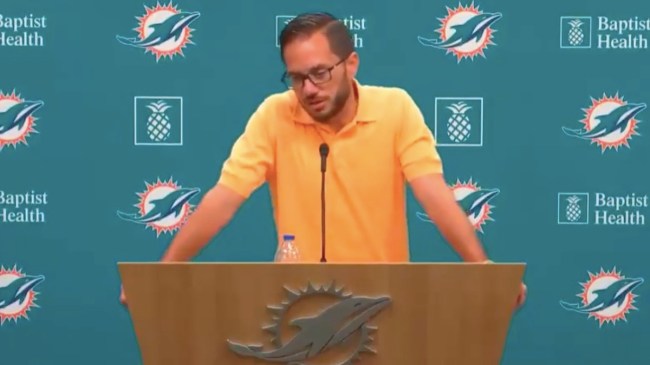 The first-year head coach not only detailed the emotions he felt watching Tua be carted off the field, but he also again defended the decision to play the 24-year-old signal-caller despite the fact that he appeared to suffer a concussion on Sunday.

“I’ll never be comfortable with a player being carted off the field,” McDaniel said on Friday to the media.

“It’s something you never want to be a part of. When I put myself there, this [getting choked up] is what happens. It’s not fun. I’m just really, really, really glad that I can hear normal Tua in his voice, and I know that his teammates who have talked to him feel the same way.”

Mike McDaniel gets choked up talking about seeing Tua get carted off the field pic.twitter.com/txZBkde55j

McDaniel also defended the decision to play Tua in the Thursday Night Football game against the Cincinnati Bengals, which saw him knocked out of the game in the second quarter with a head/neck injury. The 24-year-old former Alabama QB was stabilized, carted off the field, and taken to the University of Cincinnati Medical Center.

“And when I tell you he was in complete mental concert, talking to us throught it, and then he played the whole game and did press conferences, then he did media all week. If I were to sit someone for a medical issue going against medical people abstractly, then when do I play him again?”

Mike McDaniel again defends decision to play Tua, says he listened to medical experts "If I were to sit someone for a medical issue going against medical people abstractly then when do I play him again" pic.twitter.com/vM1mYK5sHk

Following Sunday’s game against the Bills, the Dolphins said that Tua passed the concussion protocols while Tagovailoa said it was his back that was injured. The NFLPA subsequently requested an investigation into the matter. The questions surrounding Tua’s return to the field on Sunday and Thursday will only grow louder in the coming weeks and days given how traumatizing his head injury was.