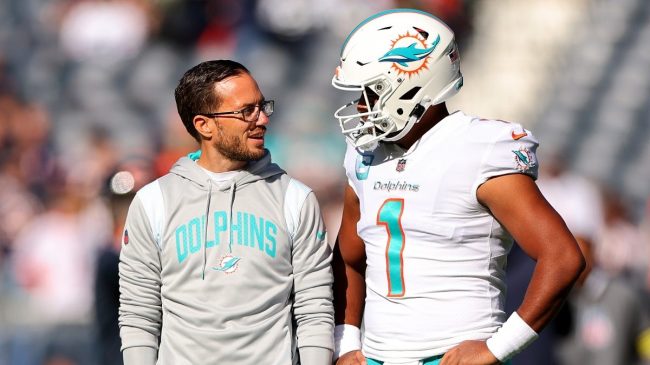 The Miami Dolphins have been red hot most of the season, thanks to Tua Tagovailoa breaking out. It also helps he finally has a head coach that believes in him. Mike McDaniel seems to have unlocked his young quarterback and the secret might be due to his consistent trolling.

NFL Films shares a little clip of the Dolphins’ head coach talking it up on the sideline with Tagovailoa. Listen to Mike McDaniel troll his quarterback after watching some of Tua Tagovailoa’s old high school film.

“Bro, your technique was trash.” @Tua and Mike McDaniel’s relationship is something special 😆pic.twitter.com/dwBYcU6plY

That’s not the only time McDaniel has trolled Tagovailoa either. Apparently, it’s something he likes to do, as it’s generated a unique relationship between the Dolphins’ head coach and quarterback. Here is Mike McDaniel trolling Tua Tagovailoa about his college days.

McDaniel telling Tua in his ear piece that Georgia is the best team in the SEC is an ELITE troll😭😭 pic.twitter.com/qy7CBBaZJH

All we know is we never want this trolling to stop. Mike McDaniel has proven to be one of the more hilarious head coaches in the league. Remember when he simply told Justin Fields to “stop it”? His uniqueness sure seems to be helping the Dolphins succeed, as the team is currently in first place in the AFC East.

Look for Tua Tagovailoa to continue playing at an elite level. And we should expect to see more clips of Mike McDaniel trolling his quarterback. Their relationship is so tight we wouldn’t be shocked if they do karate in the garage together.