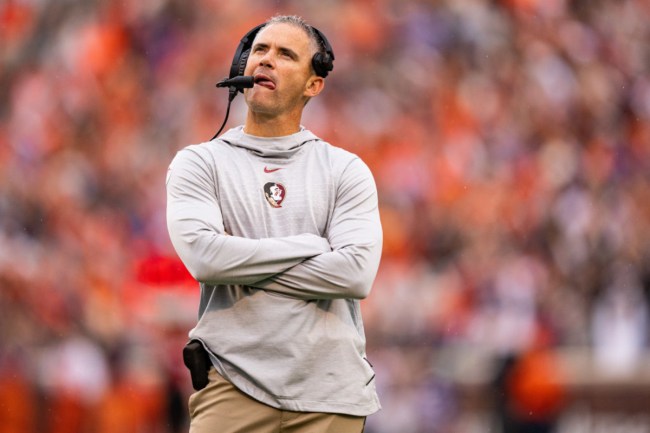 It’s without a doubt the biggest shock in the history of college football. Hunter, a cornerback out of Georgia, had scholarship offers from every big-time school in the country but ultimately decided to take his talents to an HBCU in Mississippi and get coached up by Deion Sanders.

Hunter had been committed to Florida State since March of 2020, but things quickly flipped on Wednesday morning. Rumors and reports started swirling, fast, before Hunter tossed aside FSU, Georgia, and Auburn hats prior to announcing his commitment to the Tigers.

The nation's number one recruit, Travis Hunter, JUST MADE HISTORY 😳

Florida State head coach Mike Norvell jumped on Twitter shortly after Hunter’s decision and offered up a heartfelt message. While he didn’t mention Hunter by name, it’s easy to put two and two together.

Great day for student athletes across the country getting to live out a childhood dream of signing a college scholarship. Respect decisions and celebrate accomplishments. Grateful to be a part of such a wonderful program representing incredible young men and the #NoleFamily 🍢

Norvell’s message here is spot-on, but that didn’t keep some college football fans from roasting the head coach.

Great day for student athletes across the country getting to live out a childhood dream as there's a drive into deep left field by Castellanos and that'll be a home run. And so that'll make it a 4-0 ballgame. https://t.co/PFwqXJLltt

All time "panic mode" tweet if I've ever seen it https://t.co/QdG0P8fQ1k

Norvell led FSU to just a 5-7 record this past season, his second in Tallahassee, after a 3-6 record the year prior. Losing out on Hunter will certainly sting for Norvell and Seminole fans around the country.