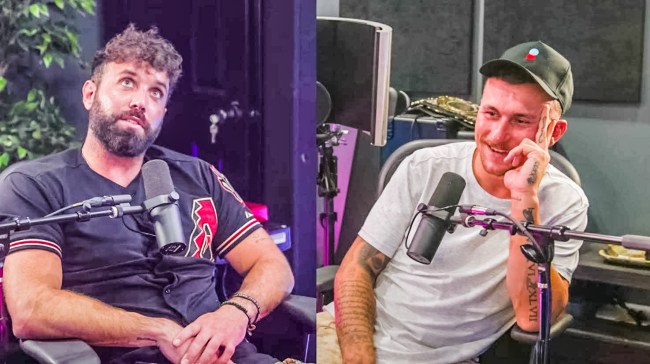 How can you forget them? What a rollercoaster. I remember exactly where I was when Johnny Manziel was drafted into the NFL. The BroBible conference room in Soho, all by myself, watching the draft in an empty office while drumming up reaction tweets in real-time. Johnny Manziel went to the Browns, as predicted, sparking an instant viral firestorm.

I think I cracked a celebratory beer after he was drafted, in honor of “our boy” making moves to the biggest stage in sports. “Our boy”, in reality, was everyone’s boy at the time.

It was the beginning of a new chapter in the Johnny Football saga.

The rest is history. By that point in time, sports culture and media – along with nerdy blog dorks like myself – were transfixed with Johnny Football’s larger-than-life swagger. Manziel captured the world’s imaginations in the fall of 2012 when he became the first freshman to ever win the Heisman Trophy. He became somewhat of a jocular icon in Bro culture.

All the while, controversies kept snowballing, adding to the narrative. The good, bad, and ugly emerged – the whole breadth and depth of the human experience, wrapped in one enigmatic sports star.

BroBible had a front-row seat to the opera, covering the Manziel rollercoaster exhaustively. If there was Manziel news, just blog it. Trips to Cabo for spring break. Appearances on TMZ. Locker room drama. No matter what time of day. Just post it. The quicker the better. That was our editorial MO at the time. Hell, we still do every now and then. We published hundreds of posts on Manziel from 2011 onward. And our audience loved it. Next to Dan Bilzerian and Lebron James, he might be one of the people we’ve covered the most over the years.

A couple years ago, I met Manziel outside baggage claim at LAX airport, shortly after his #comebackSZN effort in the CFL. I introduced myself and we briefly talked about BroBible and the sports blogs over the years. It was a polite and friendly exchange before we went on our way.

I look back on those years extremely fondly, as something that’s in the past. As an industry, media was undergoing a sea change as news moved from outlets to social media. Blogs like BroBible were right there to contextualize and catalog it to a broader audience. We moved quick.

Do you ever get in a wistful mood? I certainly do. I’ve been in a wistful mood lately. Maybe it’s because of the pandemic or the changing of the seasons, but there’s something about this moment of time that sparks some deep reflection.

I’ll throw on some Neil Young or Chris Stapleton and go for a walk in the hills by my house here in Los Angeles, leading to these moments of healthy introspection about life and its many chapters.

Lately, I’ve been thinking about the many chapters we’ve had over the years here at BroBible. We’re very formally in our 3.0 era, as a business. We’re independently owned an operated these days – a rarity in the world of digital media. We’re in charge of our own destiny. We work with the people we want to work with. It might not be the most apparent thing to you, the reader, but we’ve evolved a lot – both with our content as a publisher and the size of the audience consuming it.

All the while, our audience, for the most part, has grown up right there with us.

We’re incredibly different, as people, from what we were 10 years ago – four years ago, even.  Our personality and wit sticks and sharpens as we go along. We still are who we are, we just have a little bit more wisdom about us with age. My business partners and colleagues have grown and matured in our own ways beyond the occasionally rowdy college news / sports / culture blog we once were. We’re starting families, putting down roots in our communities, trying to inch our way towards doing some better in the world, and have a reinvigorated pride in the quality of the content we produce on a day-to-day basis.

I think sometimes people see the blog game that BroBible’s in as a binary – as an either / or. An absolute. I’ve never seen it as that way. Content consumption from a variety of places is like having broccoli and apples in your diet. Ultimately, it just comes down to taste on what you consume more of. All the while, a property has to adapt and evolve with time, attitudes, and culture.

Lots of media companies are a very long game – a low and slow cook – and can each serve their own utility to their respective audiences, with moments of flash and moments of fizzle. They’re often complimentary of each other, whether by design or not. Just showing up everyday to do the work that it takes to keep things running is how you stay in the game.

Ultimately, we just wanted to publish a men’s lifestyle and sports site we were really proud of, to an audience who hopefully enjoys it and gets some utility out of it for their individual lives. Making people laugh or share something we made is the icing on the cake. If we’ve given you something to read when you’re bored or brightened up your day in some unique or weird way, we’ve set out in doing what we’ve intended to do.

We’ve brought in some tremendous talent to help achieve that, too. And we’ve retained tremendous talent over the years. We’ve cultivated a working environment that’s team-focused. And the fact we’re still around 10 years later in the most calamitous media environment ever speaks for itself.

This is my longwinded way of getting to Mike Stud’s recent podcast with Johnny Manziel – two names immortalized from another era of BroBible. If you’ve made it this far in this post, as a reader, you’re more than aware of their influence to 2012 – 2016 Bro culture.

The episode everyone has been waiting for is here.

We covered Stud’s rap career quite a bit back in the day – the peak Bro rap period. He came to our office after his reality show on the Esquire Network aired and we played beer pong. He’s a great dude. Total bro, through and through.

I wasn’t aware of it until recently, but the former Duke baseball player-turned-bro rapper is killin’ it in the podcast game these days with the YNK podcast. The show’s guest list is like an alumni network of the world at peak Bro – Mike Posner, Huey Mack, Jimmy Tatro.

He had Manziel on a recent episode. Listening to it is a walk-down-memory lane, like flipping throughj chapters of a very public Manziel saga, documented here on BroBible and throughout the blogosphere.

Johnny Manziel is a former Heisman Trophy winner and college football legend. On the field, he’s best known for his ability to extend plays as a dual-threat quarterback, earning nicknames like “Johnny Football” and “Money Manziel” that are iconic still to this day. Off the field, well, let’s just say Johnny is Johnny.

Many know how Johnny’s NFL career played out—and he’ll touch on that in this episode. Since leaving the league though, he’s been out of the public spotlight, golfing like a pro in Arizona and spending time with those closest to him.

One of those he’s closest with is Mike. Johnny gave the green light to come on and talk about what he’s doing now to get ahead in life, and how he’s reconciled with the game of football. There’s even a major announcement of what he and Mike are creating together that will release in the near future.

But overall Johnny has no regrets; the truth is what it is. In other words, “The Ball. Don’t. Lie.”

Watching these two talk is the ultimate throwback to 2014 Bro culture. I watched it the other night and it took me back, fondly, to a very specific cultural era of which BroBible was a part of in a major way.

All the while, they’re ripping heaters and crushing Bud Lights – An all-out Bro-down.

Or, as Jimmy Tatro would call it, a kickback.

Just look at this gnarly ashtray:

there’s so much going on on this table, all y’all’s clean podcast aesthetics suck pic.twitter.com/0p7i61YYJr

-Manziel on how his college partying at captivated the blogosphere, including the time he got kicked out of a frat party at the University of Texas. Man, the content to come out of that incident here at BroBible was unreal.

-Hanging out with Drake during peak Drake, around 2013’s Nothing Was the Same. This included a pretty legendary trip to Toronto when he was at A&M where they became boys.

-On being seduced and professionally distracted by the Hollywood party lifestyle during a trip to Los Angeles while at A&M.

-On not really having closure that he was phoning it in and not giving it his all during his turbulent final year with the Cleveland Browns.

-On finding himself on the golf course during COVID.

-Explaining the time Manziel’s entourage assaulted a fan looking for a selfie at a club, while throwing his phone. “I look at my boys, I say play fetch. Like deadass.”

I’ll let you draw your own conclusions.

Just know that, if you’re the kind of person who read all of my rambling because you too remember that not-so-distant era of Bro culture, it’s very worth the time.