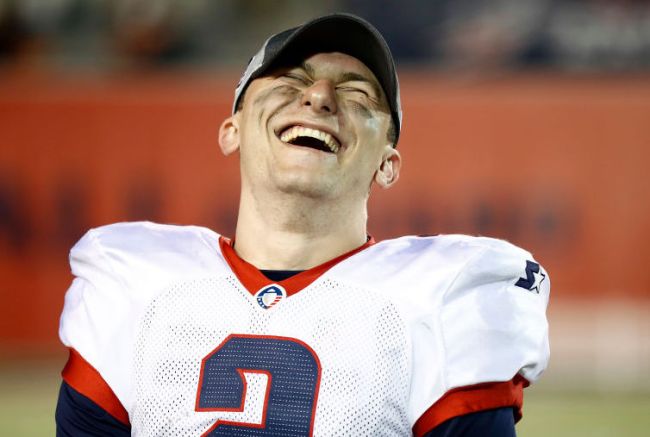 Johnny Manziel was one of the more highly-touted quarterbacks in the country heading into the 2014 NFL Draft, and while many people thought he had the makings of a potential NFL superstar, there were also plenty of questions surrounding his maturity that would be answered very quickly.

The man known as “Johnny Football” was fighting an uphill battle from the start thanks to the curse that comes with being drafted to play in the pocket for the Browns but he certainly didn’t do himself any favors. He found himself hit with a $12,000 fine before even playing in a real NFL game after flipping off the Redskins’ sideline during a preseason contest ahead of his rookie year, where he failed to live up to the lofty expectations that were set for him.

It was only a matter of time before his on-the-field struggles were overshadowed by various incidents off of the gridiron that likely contributed to his consistently underwhelming performance. It wasn’t exactly a secret that Manziel liked to party and grappled with mental health and substance abuse issues that led to his downfall, and while the Browns attempted to address the problems, the team basically said “Fuck this, we’re out” after the quarterback was spotted at a club in Las Vegas in 2015 the night before the final game of the season (which he’d been ruled out of due to a concussion) and failed to show up to the stadium the following morning.

After flaming out of the league in spectacular fashion, Manziel took some time to try to get his life back together before announcing the commencement of #ComebackSZN. However, he saw his attempt to return to football stymied after being kicked out of the CFL for violating the terms of his contract before taking his talents to the ill-fated AAF and ultimately deciding to walk away from the game for good.

However, he’s still fairly active on social media, where he has no issue roasting himself or firing back at his many critics, ranging from his mortal enemy Darren Rovell to random people who jump into his mentions.

Earlier this week, Manziel received a DM from a guy who felt the need to let him know he had gotten blackout drunk and passed out facedown in a bathtub while rocking the jersey the QB wore during his time in Cleveland and the former Brown was nice enough to respond and give him “much love” for what I guess you could call a tribute.

There might be plenty of reasons to hate on Manziel, but if he’s looking to rehabilitate his image, this is a pretty damn good start.