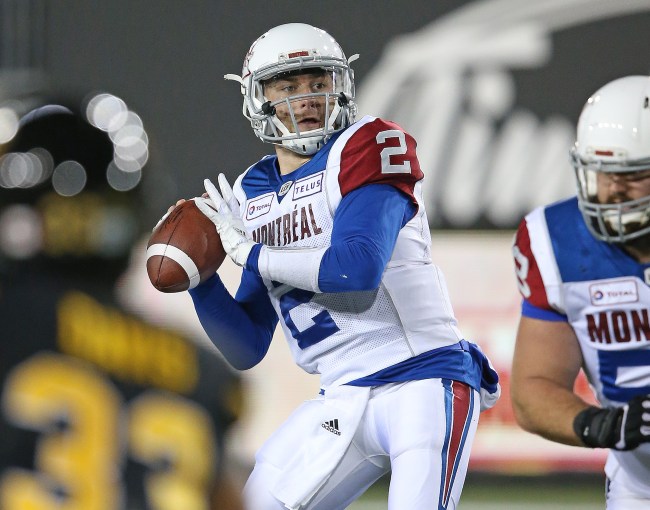 This afternoon the Montreal Alouettes released Manziel at the direction of the CFL after he was unable to abide to contract agreements set by the league.

The Montreal Alouettes announced on Wednesday that the organization has been directed by the @CFL to terminate the player contract of international quarterback Johnny Manziel. More info : https://t.co/jKFbOrgsxA

Manziel has essentially be banned from the CFL altogether.

The CFL has informed all clubs that it will not register a contract for Johnny Manziel should any club attempt to sign him.

Last year the troubled Manziel, who was a history of substance abuse and domestic violence issues that have kept him out of the NFL, was allowed to play in the CFL only if he continued meet a number of conditions that were made confidential by the league.

the Canadian Football League has been engaged in a thorough process to determine the eligibility of Johnny Manziel. This process has been conducted with the cooperation of Mr. Manziel and independent of the team which currently holds his CFL rights, the Hamilton Tiger-Cats.

It has included an ongoing assessment by an independent expert on the issue of violence against women, a review by legal counsel, and an in-person interview of Mr. Manziel conducted by the Commissioner. As well, Mr. Manziel has been required to meet a number of conditions set by the league.

As a result of this process, the Commissioner has now informed Mr. Manziel and the Tiger-Cats he is prepared to approve a contract for Mr. Manziel should one be negotiated.

The process that led to this decision does, however, continue. Mr. Manziel has been informed he must continue to meet a number of conditions in order to remain eligible. These conditions, while extensive and exacting, remain confidential.

Depending on why Manziel was cut it’s pretty likely that he finds a home in the XFL or the AAF.

Convincing Vince McMahon to give him a shot in the XFL may be Johnny Manziel's only remaining hope of ever playing another professional football game. https://t.co/L0qFi50tYp